Children go through a series of stages as they are learning to write.  From the first scribbles to writing names, there are anticipated stages.  While the characteristics within these stages may vary upon the child and the lines between the stages a bit blurry, the series of stages are predictable and every child moves through the stages at some point for some period of time. 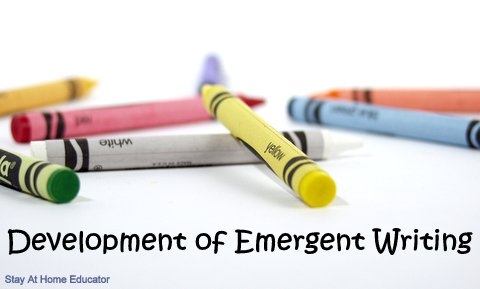 Scribbling looks random, but to a child, scribbles are very purposeful.  While scribbles do not resemble letters or writing, they do represent the ideas of a young writer.  These beginning attempts to writing can be proud accomplishments to a youngster and should be encouraged.  At his stage, thick crayons and markers on unlined paper is the most appropriate.

At this stage in development, children make the connection that writers use symbols to convey meaning.  Their scribbles have taken on more shape, such as circles, straight lines, and other figures of meaning to the child.  However, there is little orientation at this stage, meaning that these letter-like forms will appear all over a page, not from top to bottom and left to right.  Children are excited to share with others their writing and can often tell a story about their picture.  Crayons, markers and blank paper are still appropriate writing tools.

At this stage, children begin to use random, but often times somewhat familiar letters, such as those in in the child’s name.  Writing usually consists of strings of upper case letters with little or no concern about spacing of letters or between words.  During this stage, children still do not recognize letter-sound relationships in their own writing, so letter sounds may not correspond to what the child has believed to have written.  At this stage, children gain from expanding their use of writing materials.  Cards, envelopes, notepads, colored pencils and some pens are motivating to children at this stage of writing.

During this stage of writing development children learn more about how spoken words correspond with written words on a page.  They often point to familiar words in text, albeit sometimes wrong, such as the child that holds up a book and says, while pointing to the title, “Construction,” when the actual title is “Roadwork”.   This demonstrates the child knows concepts of words in writing.  However it is not until kindergarten and first grade where children can master word spacing in their own writing.

Within this stage, children go through a series of mini stages that include representing initial sounds with corresponding letters.  Children begin to use consonants to represent words, and then may insert vowels.  Although at this point the spelling of words is more inventive than phonetic.  Children gain from using a range of writing materials, as well as writing for multiple purposes.

The final stage of writing development children have a fairly firm grasp on letter formation.  Most words are spelled correctly, and those that are not, represent a base in phonics.  They have knowledge of upper and lower case letters, placing on paper, and spacing between letters and words.  With this knowledge, children’s writing looks more traditional like that of the English language.

Regardless of the stage, it is important to recognize and honor the efforts of your young writer.  Encourage your child to write and share their stories, and take pride in displaying examples of their writing on the refrigerator or in their bedroom.  This recognition and encouragement is very motivating to the child.

Click here for images exemplifying each stage of writing development.