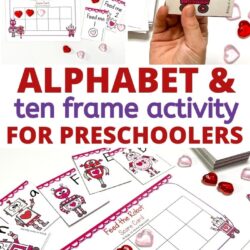 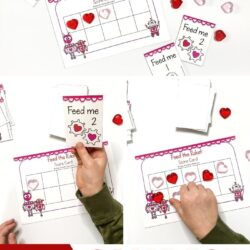 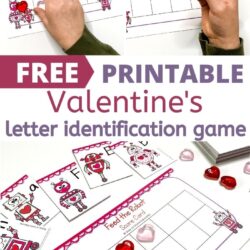 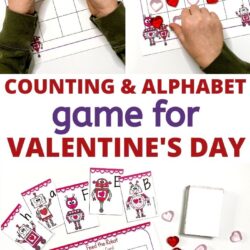 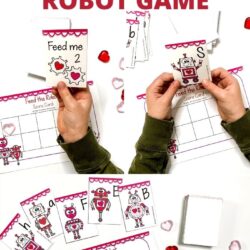 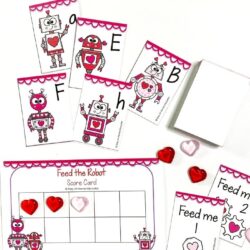 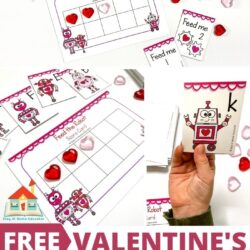 Teaching letter names or sounds doesn’t have to be done in dry, drill-and-kill style. A cute Valentine alphabet game like Feed the Robot is just the opposite. And it’s one of many Valentine’s alphabet activities in this post! It’s interactive, hands-on, super fun, and even a wee bit silly. And as an added bonus, children also get to practice their one-to-one correspondence skills!

Be sure to read the entire post for more ways to use these Valentine’s themed alphabet cards.

I still hear pretty frequently of parents and teachers relying on flashcards for teaching important foundational skills in reading and math.

But here’s the problem: flashcards only really result in rote memorization. This means if you’re using flashcards alone, you’re only really scratching the surface…of a foundational skill.

Now, let me be clear. Flashcards are fine for some kids. Some kids really respond to them. My first grader, for example, loves sight word flash cards because she’s so competitive, even if only competing against herself.

And a little bit of flashcards every once in a while won’t hurt your preschooler, either. They are great for waiting at the doctor’s office or at a restaurant. I’ve even used them to entertain my kid in church.

But I’ve never met a preschooler who asks for flashcards over a crazy fun Valentine’s robot alphabet game.

So don’t forget to grab your free printable at the end of this post. Your preschoolers will be asking for it again and again!

This game not only teaches letter recognition and letter sounds, but it also exposes children to ten frame counting skills and one-to-one correspondence skills, too! All in a fun–yet simple–alphabet game!

I’m always getting asked for book recommendations for Valentine’s Day, so here is a small Valentine’s book list to get your preschool classroom library off to a good start.

Print the game and cut out the cards. Mix up the cards and place them in a pile face down. Give each player a score card and invite them to fill their ten frame while playing this super fun game.

This is completely unnecessary, but it you want to make this Valentine’s game even more fun, use Valentine’s themed manipulatives! Here’s what I used:

How to Play the Feed the Robot Game

Now that the letter game is set up, you’re ready to play!

Draw a card from the pile and identify the letter and/or sound, then place it in a discard pile.

If you teach a wide range of levels, I’ll give you lots of variations of play down below.

If the player draws a “Feed me” card, he or she must identify the number of items to “feed the robot.” Then carefully count the corresponding number of counters from the player’s ten frame scorecard. Set those aside.

Once those counters (otherwise known as robot food) are set aside, the player must use their very best robotic voice to say, “yum, yum” or “mmmm, delicious,” and maybe even add in a burp.

Adding in a burp at the end makes it really silly because the rest of the players get to say, “Robot! Say excuse me!” which always results in gut-rolling laughter.

Variations of Play for a Variety of Skill Levels

You and I both know that preschoolers develop at their very own rate. This means that not all preschoolers are able to play this game exactly as described above. Here are some different ways to play so your children can learn the best.

My preschoolers love to play alphabet games like these all year long, and this robot game quickly became a favorite. With just the right amount of rules and silliness, it’s such a fun and effective way to reinforce alphabet skills.

Think you need this activity for preschool? Go ahead and grab your free copy below.

Looking for something to help teach your preschoolers about kindness and friendship, as well as letters and numbers? This Valentine’s Day Activity Pack includes six super fun activities and multiple variations of each!