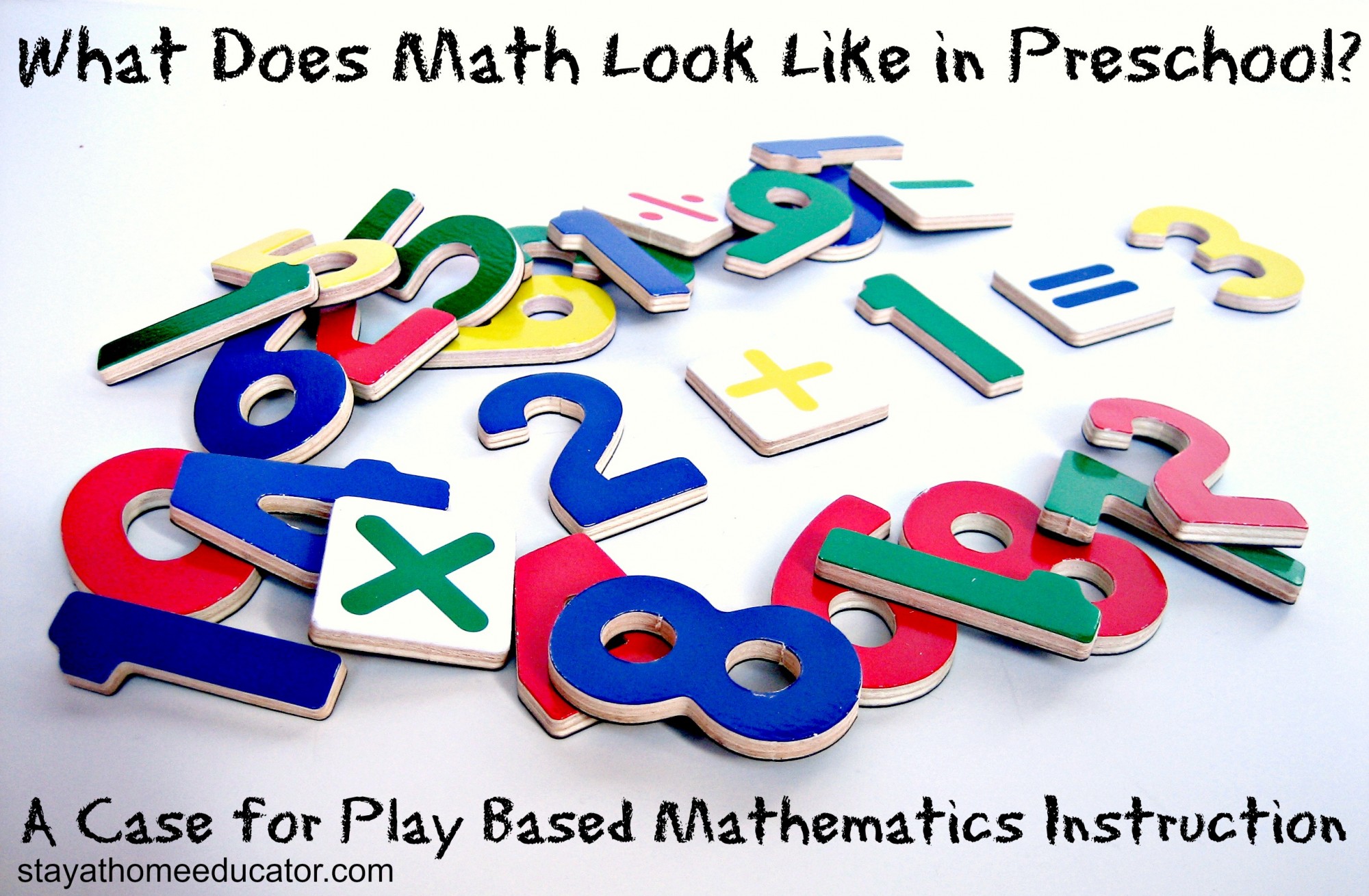 While formal mathematics instruction may not begin until children enter elementary school, mathematical concepts are developing well before that time, nearly since birth.  Children use this informal math knowledge to organize and expand their play.  They do this through counting, sorting, ordering, assigning, building and such.  Take a look at the following scenarios:

This morning my four year old son, William, was playing with his train set.  He had arranged his trains at Tidmouth Sheds so that each train had their own stall.  He then wanted to be sure that each stall had two doors and was easily frustrated when one stall was missing a door.  “But, Mom!” he called to me, “Whiff needs two doors, but he only has one.”  I remedied the problem by asking my son if he would like help in finding the missing door.

Meanwhile, Corinne, just two years, was playing quietly on the other side of the room with her ponies.  She has several ponies of various sizes, ranging from about six inched high to only two inches.  Corinne carefully placed each pony in a line.  “This one the mama pony,” she said, pointing to the largest pony who was first in line.  “And this one teeny tiny pony.  It’s teeny tiny!” she said, referring to the last pony.  The remaining five ponies were very deliberately placed between the largest and smallest ponies, in appropriate order based on succession of height.  Once satisfied, Corinne then gave an apple, carrot, or bale of hay to each pony.

As the above stories indicate, young children, especially toddlers and preschoolers love mathematics.  Children use basic math skills when playing trains or ponies, kitchen or house, detective or spy, and so on.  They use math when building cities with blocks or when they make pictures using shape stamps.  At this young age math comes easily and naturally, and it mostly happens through play.  Unfortunately, by the time children reach the third grade, most admit that math is their least favorite subject, sharing that it has become difficult to understand and they don’t know why they practice the skills demanded by the teacher.  Obviously, the five years children have before entering formal school can play a pivotal role in their mathematical education.

Recent research indicates that the mathematical skills children have when they enter school is the greatest predictive element for later school success, even above reading and language development.  Unfortunately, research also shows that toddler and preschool aged children have very little exposure to math activities in the home and even in formal preschools.  Most schools spend on average twice the amount of time teaching reading as is spent teaching math, and in some schools over three times the amount, two and a half hours per day dedicated to reading while only forty-five minutes to math instruction.

Appropriate mathematics instruction in preschool and kindergarten begin with play.  While at the dramatic play center, a child is serving each teddy bear two cookies.  A second child joins in and pours each teddy bear an imaginary glass of milk.  This is an example of one to one correspondence.  (For more information about one to one correspondence, see these articles: One to One Correspondence, Egg Carton Counting: Teaching One to One Correspondence, Apple Drop Counting: A One to One Correspondence Math Game.)  The parent-teacher then joins in the play by saying, “I want to give each teddy bear some apple, but I only have one apple.  What should I do?”  The children respond that the apple can be cut up so each teddy bear gets a slice, which is an example of basic multiplication and division skills.  What may begin as a simple play in the dramatic play kitchen area has the potential to become a math lesson by the parent-teacher skillfully interjecting appropriate questioning and modeling techniques, causing the children to think about new concepts and relationships within their play.

Although children can and do naturally incorporate math into their play, it should not be assumed that it will automatically take place.  As with any other best practice in teaching, it should be planned and not completely left to chance.  Parent-teachers can arrange the home or classroom in such a way to encourages mathematical thinking.  They can encourage the development of math skills through every day activities, such as counting steps while climbing the stairs, matching cups of the same size, or by sorting materials or toys according to their attributes.  Mathematical situations can be staged, too, such as by asking the children to set the table for snack time, or by having them divide out snacks so that everyone gets an equal amount.

The home and preschool environment in steeped with opportunities for formal and informal math instruction.  A thoughtful caregiver will look for opportunities to create mathematical discussions and model concepts through play.  This allows for children to develop mathematical relationships, problem solving and reasoning skills in the most natural way.  This is the power of play based mathematics instruction.