This week in Preschool Co-op we wrapped up all things related to autumn.  On Monday I posted activities that were Halloween themed and today is all about pumpkins! Let’s explore the pumpkin theme for preschoolers. 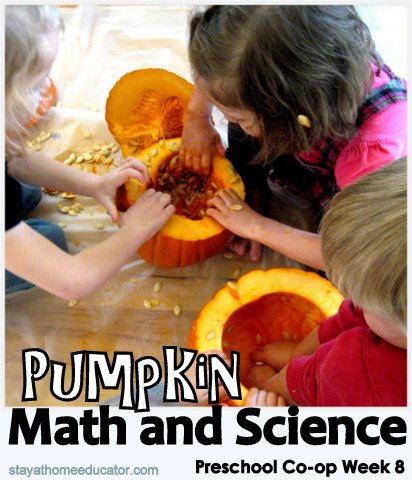 Sensory Play – Of course I couldn’t teach a pumpkin day at preschool co-op without cutting open a pumpkin and letting the kids dig in.  This kind of play allowed for the students to explore the different textures of the pumpkin: smooth and hard on the outside and slimy and stringy on the inside. It served as an opportunity to teach that new vocabulary in a hands-on way, too.

This week we read the following pumpkin themed books:

Life Cycle of a Pumpkin – Students learned about the life cycle of a pumpkin through reading and discussion.  While reading aloud, it is important to allow students to comment about observations they’d made in the story and illustrations, as well as stop to explain the text if needed.  We read Patty’s Pumpkin Patch by Teri Sloat and then I asked the children to retell the story by looking at the pictures.  It was rewarding to hear how well they could explain the process of growth in pumpkins throughout the season. 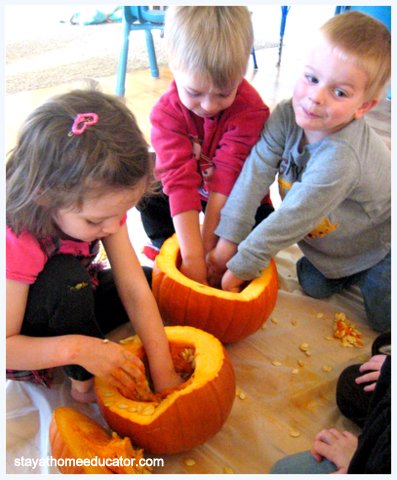 Phonemic Awareness: Word segmentation – Students learned to identify individual words in sentences.  I prepared on a sheet of chart paper ten simple sentences of five words or less.  I read the first sentence to the students and then modeled counting the words.  Then, we practiced using the remaining nine sentences.

On the second day, I quickly reviewed with the students the concept above, and then we practiced identifying words in sentences without using the chart paper.  I held up a finger for each word in the sentence, and students counted my fingers to identify the individual words.

Just an exciting note: My son, William, said to me this morning, “Mom, chapstick is one word, but it has two parts.”  Pretty close, but I still felt like a proud mama at that moment.

Estimating Pumpkin Width – Students learned about estimation by measuring pumpkins.  I used a string to show how long around a pumpkin was, then asked the students to cut strings representing their own estimated lengths.  I used masking tape to label each string with the child’s name.  Then, we lined up the strings from the shortest to longest and used each string to measure around the pumpkin, sharing observations about how close the estimation was to the actual width around. 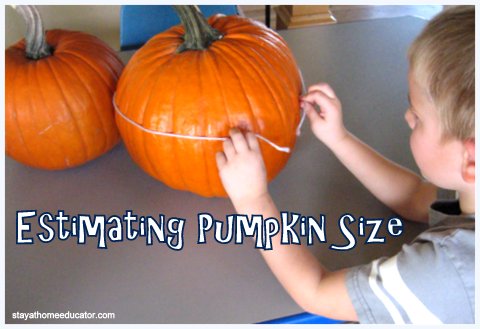 Estimating Volume – Students explored concepts of volume using Halloween candies.  I showed the students candy corn and pumpkins, asking which is bigger.  Students sampled one of each, feeling the size in their hands before tasting them.  Then I showed the students what one candy looked like in a container and asked how many candies they thought it would take to fill up the entire container.  It was interesting to hear their answers.  Some students said only one or maybe thirty-three, while others gave more reasonable estimations, like three or six.  Each student shared their estimation and then we counted the candies as we filled up the smallest container.

Then we discussed if the five pumpkins that fit into the smallest container would also fit into the middle and then the largest.  Again, the students answers were all other the grid, which demonstrates their understanding of a rather abstract concept: estimating and volume.  After doing this activity with the pumpkin candies, we tried it with the candy corns.  The challenge was to recognize that since the candy corns were smaller, it would take more of them to fill up the container.  Each activity was repeated with different sized containers to show students various volume amounts. 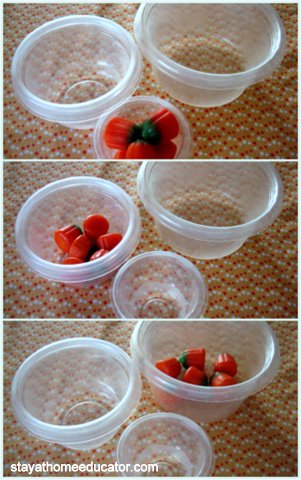 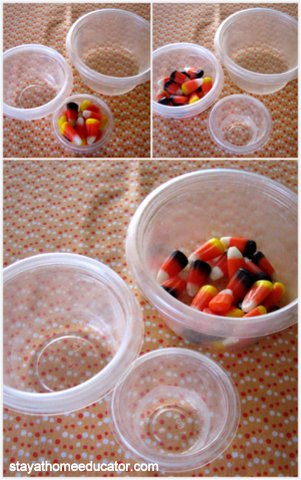 Play Dough Pumpkin Faces – Students rolled out our hazelnut and cinnamon scented play dough and made pumpkin shapes using a round biscuit cutter.  From there, stduents had to shape the pumpkin themselves.    Then, students used black beans to make pumpkin faces.  Because Halloween and jack-o-lanterns are a relatively new idea to my preschoolers, being 3-4 years, I modeled one and asked the students to copy it.  Once done, the students then has a better idea of how to make a face using the beans and creating new faces using their own ideas.  I loved that one student made his pumpkin face smile right off the play dough.  There was a line of beans on the table about six inches long!  I got this idea from Counting Coconuts in her post One Our Shelves:Halloween. 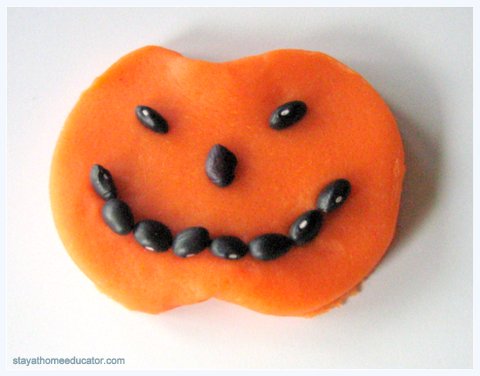