Geometry is only one of the six primary strands of math that is considered foundational to later mathematical learning.  (The others are number sense, arithmetic operations, algebra, measurement and data analysis and probability, but I’ll save those for future posts).  Basic geometric principles connect directly to other mathematical concepts and skills, such as naming, constructing, comparing, and sorting, and children as young as early toddlers are developmentally ready to explore basic geometric principles.

During the toddler and preschool years children are making connections in geometry by analyzing the properties of two and three dimensional shapes.  A box has corners and can be stacked, a ball is round and can be rolled.  Children practice composing by building, and decomposing by taking apart shapes.  If a square is smooshed, it becomes a rectangle, if a circle is smooshed, it becomes an oval.  They interpret direction by using location terms such as “above” and “next to.”  Playing with shapes develops spacial relationships and knowledge of relative positions, and can require immense amounts of planning, such as the child who builds a tower like the one in her favorite storybook.   The amount of learning that takes place while playing with shapes, two dimensional or otherwise, should not be underestimated.

We know my little guy loves to trot, hop, roll, and slide (to name a few) so it is only appropriate that I share six easy shape games using the same fast set-up that really keeps him moving!

Begin by using electrical tape to make the desired shapes on the floor.  I prefer electrical tape over masking tape because of it elasticity and it does not leave any residue on my wood floors.  In this activity, I focused on three shapes William already knew (diamond, oval, and heart), and then added one he was less familiar with (cross), and one that was completely new to him (naming it crescent…not “moon”).  You will also need to draw out the same shapes on index cards. 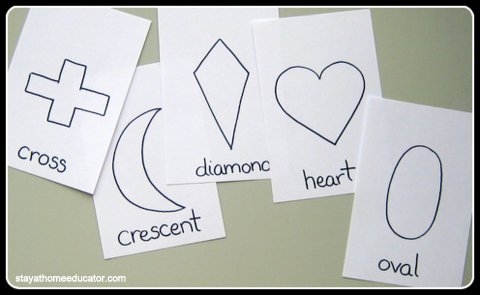 Bean Bag Toss – You know how I love bean bags!  Draw a card and throw a bean bag to the matching shape.  Count the bean bags on each shape.

Trace the Shape with Hand – While on the floor with your child, have him trace the shape with his hand while describing it’s characteristics.  “See how to crescent is round like a circle, but here’s a point, kind of like the corner of a square.”  Huge amounts of vocabulary can be learned!  (Note:  William wanted to trace super fast, missing the details of each shape.  So, I modeled numerous times how to trace.) 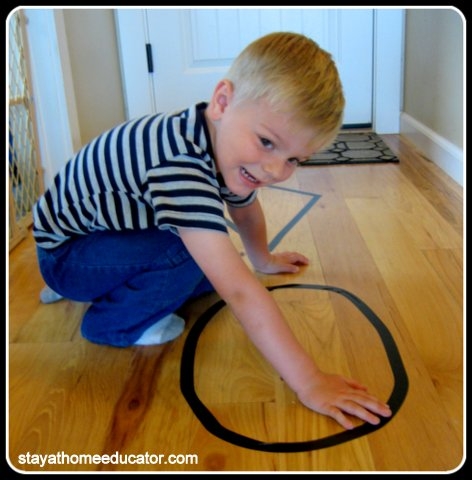 Trace With Foot – This is the activity that actually inspired this post.  With your kiddie standing in the center or at the top of the shape, have her trace the shape with her foot.  (Note: It was very difficult for William to maintain his balance while tracing, so I knelt next to him so he could hang on to my shoulder.  This was important because it allowed him to do a better job of tracing the details, like the curve versus the straight lines in the heart.  I made him “pause” so I could get this shot). 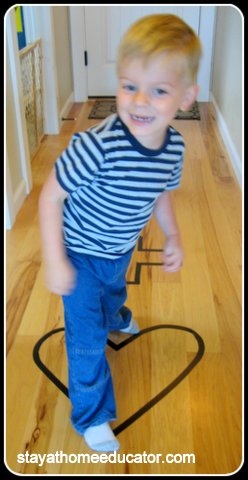 Trace the Shape With a Car – This was actually William’s idea when he mistook the cross for a road for his toy cars.  Not a bad idea! 😉  This was actually much more effective than William using his hand.  I think he saw a greater purpose when using his cars. 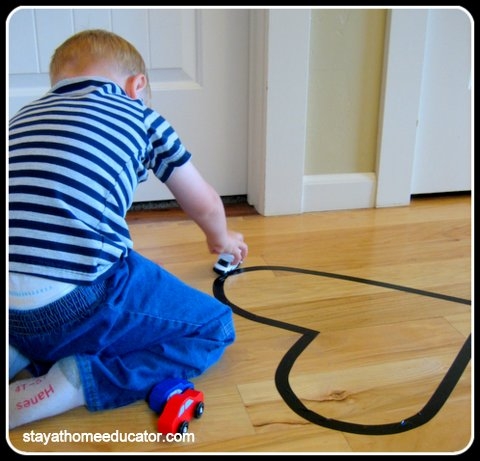 Shuffle Board With Shapes and Cars – Once William was tired of using the tape as a roadway for his cars, William then began shooting his cars off and crashing them into one another.  So, I used his play to make up game that is similar to shuffle board.  Draw a card and roll a car to the matching shape, being careful not to overshoot.  Of course, crashing other cars off the shape in encouraged (mostly by William, of course). 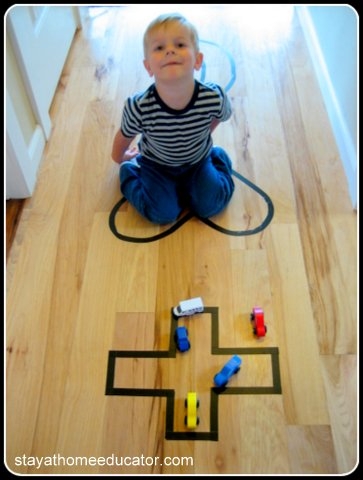 Draw and Slide – This is probably one of William’s favorites.  No surprise.  Draw a card, then run and slide to it. 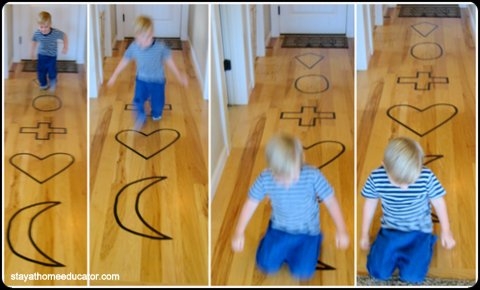 I know that William could learn his shapes just fine by reciting them from a shape book, or by flashcards…but why do it that way when we can have fun and build memories (math and sentimental) by choosing one of the six activities above…not to mention all the research that supports play based learning and how movement increases memory capacity.  (If you missed it, check out my post here.)

stayathomeeducator.com/
« Editable Letter Identification/Sound Assessment for Preschoolers
The Dirt on Dirt: How Getting Dirty Makes for Heathy Kids »