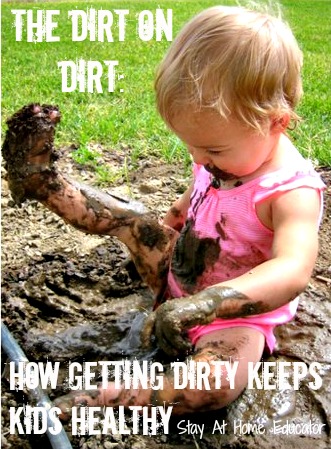 Recent studies report that children who spend the better part of their day playing indoors (rather than outside in the dirt and sunshine), in the company of technology, have a increased risk of obesity, vitamin D deficiency, depression and also attention deficit hyper-activity disorder.  In fact, in the last twenty years with the dramatic increase of media entertainment and electronic games, childhood obesity has more than doubled and prescriptions for anti-depressants and ADHD medications in pediatric patients has risen sharply.

But, dirt harbors bacteria, so naturally we worry about our children getting dirty in the mud.

Researchers now recommend playing in the dirt as a way to boost the body’s immune system, that digging in the dirt (and even ingesting a little bit of it) actually can help decrease a child’s risk of allergies and asthma.  The basis for this stems from the idea that limiting child’s play to primarily the indoors limits their exposure to natural organisms that build a healthy and strong immune system.  That limitation causes a greater risk of autoimmune diseases such as multiple sclerosis and type-1 diabetes in adulthood. 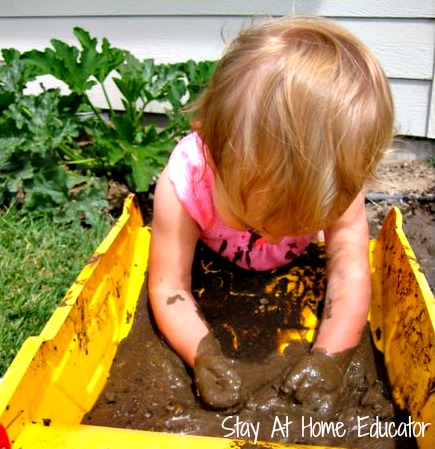 In addition to the physical health benefits, dirt and mud play simply makes a person happier.  Many studies indicate that playing outdoors and getting messy decreases stress and anxiety in children.  In a lab study using mice, researchers at the University of Bristol and their colleagues at University College London found that exposure to certain friendly bacteria found in soil altered behavior in much the same way man-made chemical ingredients do in anti-depressant drugs.  Human cancer patients treated by the bacteria Mycobacterium vaccae, also found naturally in soil, reported a better quality of life.  Researchers reason that the bacteria Mycobacterium vaccae activates the neurons in the brain that contain serotonin, the chemical that makes humans happy.  Further studies are currently being conducted.

Sometimes, it seems that kids do know what is best for them, and based on the research, playing in the dirt and mud has so many healthy benefits.  Building strong immune systems, decreasing obesity and depression, decreasing stress and anxiety, and so on and so on.  The advantages outweigh the detriment of getting muddy.

Get the kids outside and let them get messy with some of these great ideas!

Beyond Mud Pies: Mud Bricks by Family fun
30+ Mud Activities by Growing a Jeweled Rose
How We Built a Mud Pit by Having Fun at Chelle’s House

Getting the Dirt on Dirt for happier, Healthier Children by National Wildlife Federation
Bacteria Found In The Soil Activated A Group Of Neurons That Produce The Brain Chemical Serotonin by Medical News Today
Report Recommends Mud Pies for Earth Day by Galion Inquirer
The Mud Center: Recapturing Childhood by Community Playthings
Let Your Kids Get Dirty! by Simple Mom
Marvelous Mud by Rusty Keeler

stayathomeeducator.com/
« Six Shape Activities That Involve Movement
Tips for Choosing Out Books for Toddlers and Preschoolers »