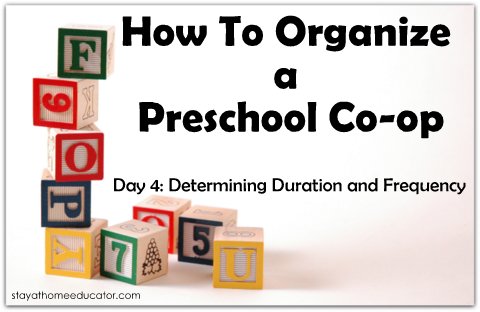 This is day four of a five post series about how to organize and run a preschool co-op.  This five post series began on June 17, 2013 and will run through June 21, 2013.  Please join in by subscribing to receive posts via E-mail, RSS, on Facebook, and on Pinterest.

If you missed a post, you can find it below.

So far so good.  You’re well on your way to having a well organized, functional preschool co-op.  Now it’s time to decide on when to have preschool and how often.

When To Begin the School Year

Simply put, anytime you’d like.  Running a co-op out of your home means that you have the flexibility and control to decide for yourself when to begin the school year.  My preschool co-op tends to begin most years after the Labor Day holiday in the US.  We tend to somewhat follow the public school schedule in the fall, taking both a Thanksgiving and Christmas break, but we do not follow it so closely in the springtime.  We don’t take a spring break unless families will be out of town.  We honor all national holidays that allow the preschoolers to be home with with families, especially if Dad has the day off work.  We take the summers off.  However, I know many homeschooling families who do a modified year-round schedule.  This can also work well for a preschool co-op.

How Frequently a Preschool Co-op Should Meet

How frequently preschool should meet should be determined by two factors:

If the goals of your preschool co-op include preparing the children for formal elementary school education or kindergarten, then you may consider holding preschool three times a week.  Most formal preschool programs range from two to three half days a week, and a few have programs that are five half days per week.  If your co-op is made up of mostly three year olds, then probably one day a week is enough, and certainly not more than two days each week.

It is also important to consider what is realistic for the participating mothers, especially those mothers who will be teaching.  Adding a teaching day to the week requires a surprising amount of time and energy that will be put into planning and preparing.  My group has always done two days a week.  It allows the children to experience preschool without taking too much away from the mothers, and it also allows for time for playgroups and such on the off days.

Considering the Time of Day For Preschool Co-op

Here you basically have two options, morning or afternoon.  I always prefer mornings as it does not interfere with nap time and dinner time.  However, it must work well for all mothers.   Perhaps a mother works in the mornings, then she will have to arrange for a way to get her child to preschool co-op, or the co-op will have to be in the afternoons.  I also prefer mornings because my kids tend to be better behaved in the mornings than the afternoon.  We get our best work done in the mornings, but afternoons can work as well.

Length of Time To Hold Preschool

The length of time preschool should be held is largely determined by two factors:

The age of the children is important to consider because younger children have less energy to focus in directive learning.  My first year doing preschool co-op, William was only two years old and the other children were three.  My group met for two hours.  That was plenty long for William, and an appropriate length of time for the older kids, too.  This last year, we extended preschool co-op by a half an hour, making the total time two and a half hours.  This worked well for our group, whose ages ranged from three to four years.  Even longer periods of time can work for children who are four or five, if there is enough transition and instructive playing throughout the day, however I would hesitate to extend preschool beyond four hours.  That’s about as long as kindergarten!

What To Do Now

Now is the time to decide what will work best for you in terms of duration of preschool co-op and its frequency.  Consider holidays and vacations and other scheduled events for your family.  (This last year we had a family whose went hunting for three weeks shortly after preschool started.  Obviously, he ended up missing quite a bit of school.)  Write out which days of the week you’d like your preschool to be held and the ideal hours for you and your family.  Now, write up an alternate schedule, in case not all the mothers can agree.  Again, the key is to have an idea before you meet with the other participating mothers.

This five post series began on June 17, 2013 and will run through June 21, 2013.  Please join in by subscribing to receive posts via E-mail, RSS, on Facebook, and on Pinterest.

Finally, it is time to assign roles and responsibilities for each participating mother.  This post will focus on things to consider when assigning and taking on responsibilities and what they might entail.  For example:  Will each mom take equal time teaching?  What if a mom doesn’t feel she is capable of teaching? What are other roles moms can have if not teaching?  If developing learning curriculum from scratch, who will write it?  Who will make manipulatives?  How will materials be paid for?  Etcetera.

For other posts in this series