It’s that time of year when we find displays of pine cones, gourds, and mini pumpkins at the grocery store, which happen to make the very best fall math and science center for my preschoolers! No fall preschool theme is complete without them! 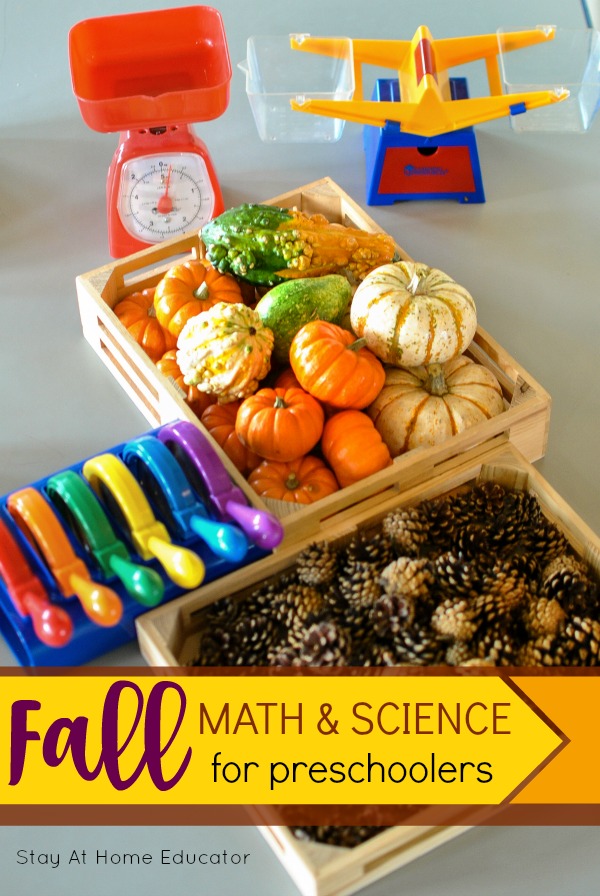 If I don’t find them at a local fruit stand, I’ll grab them up at the grocery store.

Because no autumn theme in preschool is complete without mini pumpkins, gourds, pine cones, corn tassels, and even carving pumpkins! There are so many ways to use them to reinvent your math and science center for a fall theme. (See this post for one of my most popular fall science centers).

As an early childhood educator, I’m always looking for the simplest ways to bring the best learning into my classroom. In the fall, that means taking advantage of all the foliage and natural elements available. Add some magnifying glasses and some scales, and your math and science center is golden!

Organize the gourds, pumpkins, pine cones, leaves, etc. into separate trays. I like to use these wooden trays

or some wicker baskets

. It makes the center feel so much more fall-ish. I think it’s important to spend some time making the center look nice and inviting because it really does make a big difference in getting the children to spend time and explore.

Set out some magnifying glasses and some scales. I only had two scales but set out as many as possible, and as many different kinds as possible. (Even digital scales, if you have some).

Now, invite your preschoolers to come and explore their new fall math and science center!

Guided Learning at a Math and Science Center in Preschool

When it some to open- ended centers like this one, I’m a big fan of sitting back and allowing the children to simply play and explore without distractions from me. I like to let them show me how I need to interact with them to teach them what they need at that moment.

At first, the preschoolers gravitated toward the scales, I think because they were less familiar to them than the magnifying glasses, which we use on nearly a daily basis. It took no time at all for the children to start filling the scales with the fall items.

This preschooler had to take the tray off the platform scale because the pumpkin wouldn’t fit. He was problem-solving and using his measurement skills. And then he noticed the needle on the scale moving.

At first, he didn’t make the connection. 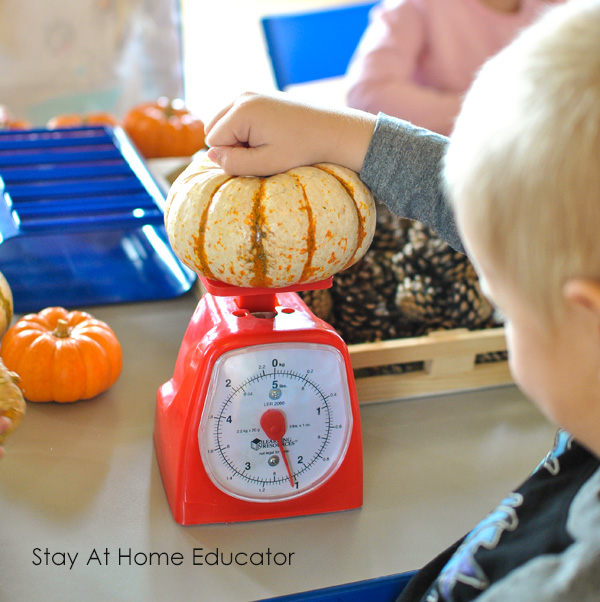 This is where, as a teacher, I come in. This is guided learning. I sat down next to my student and watched as he placed the white pumpkin back on the scale.

And the student continued experimenting with the different pumpkins.

With the balance scale, the children explored how different object’s weights compared to one another. (See this post on how I introduce my preschoolers to using a balance scale). For example, they explored how many pine cones would equal the weight of one mini pumpkin. Or they discovered that five pine cones don’t always equal the same weight as another five pine cones. This brought about an interesting discussion, too.

Me: If there are five pine cones in this bin, and five in that bin, will they weigh the same?
Student: Yes.
Me: Have you tested that idea?

I then showed the student how to compare the weights, counting out five into one bin and then I invited the student to count five into the other. (I intentionally chose the smallest pine cones to make my point).

The student then took the pine cones out and lined them up on the table. With further discussion, the student realized the pines cones varied in sizes, and thus varied in weight, too. We explored this concept again with different mini pumpkins. 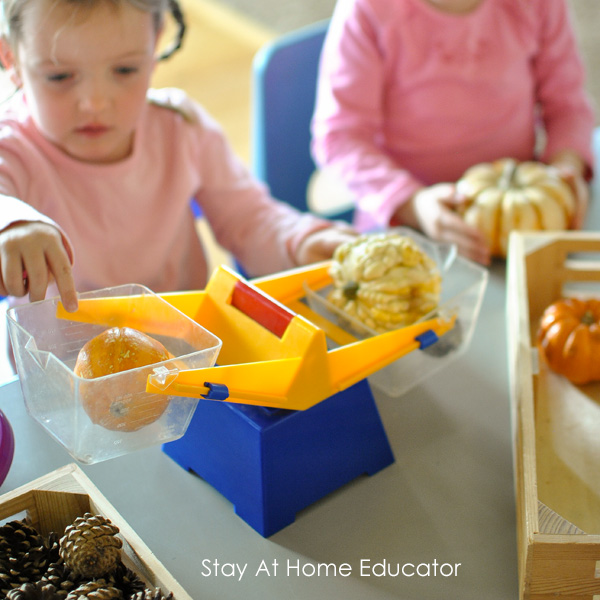 Other students were content to explore the differences of gourds and pumpkins at our science and math center. She loved feeling the bumpy gourds and tried to make them stand on their own like the pumpkins could. 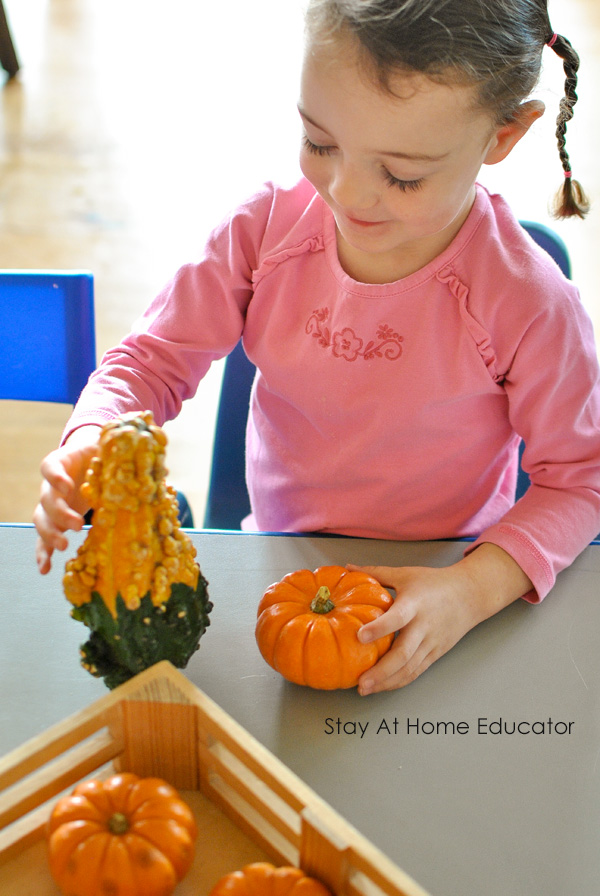 This science center kept my preschoolers busy for days on end. But if yours ever start to get bored, all you have to do is switch out a few items for something else. Pine cones for silk leaves, mini pumpkins for small pie pumpkins, etc.

Our Favorite Math and Science Books for Fall

No math and science center is complete without some picture books to support it!

Other Fun Fall Items to Add-In

Want more autumn math activities? Maybe a little letter identification, too? You might able like this fall bundle! 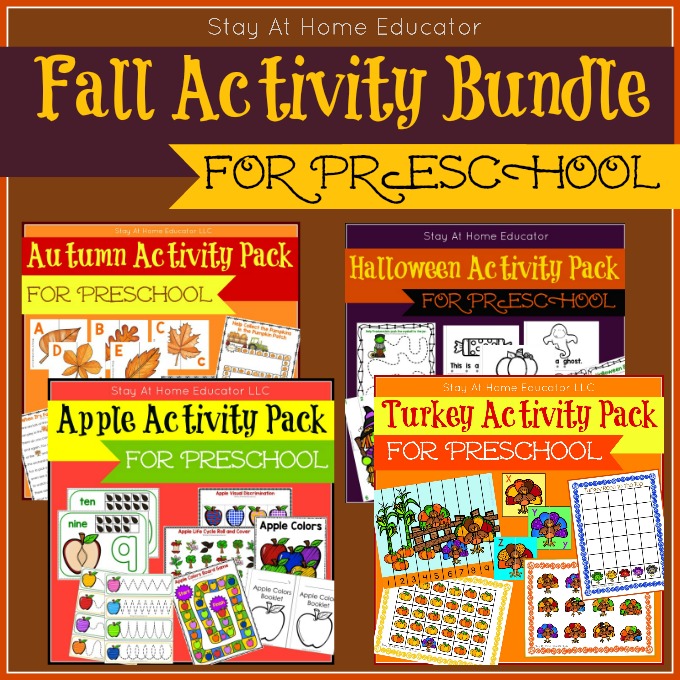