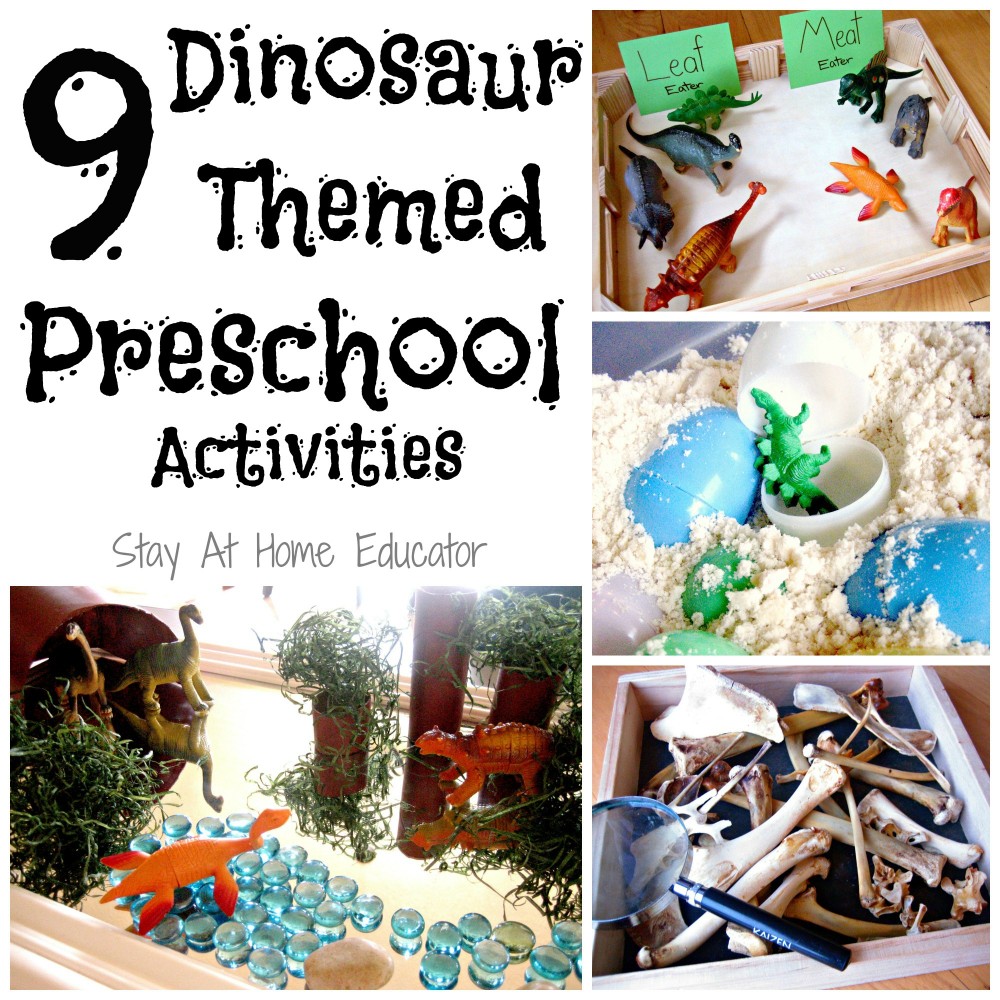 Please join me regularly via  E-mail in the right sidebar, Facebook, Twitter @StayAtHomeEdu, and Pinterest.  For your convince, I have included some of our favorite products related to dinosaurs.  Any purchase of these products goes directly to maintaining this blog.

Using cloud dough as a base, I prepared a dinosaur nest for my students by hiding small, party favor sized dinosaurs in light colored plastic Easter eggs from the dollar store.  Students opened the eggs to find a playful surprise, and filling the eggs again was an excellent fine motor activity for the students. 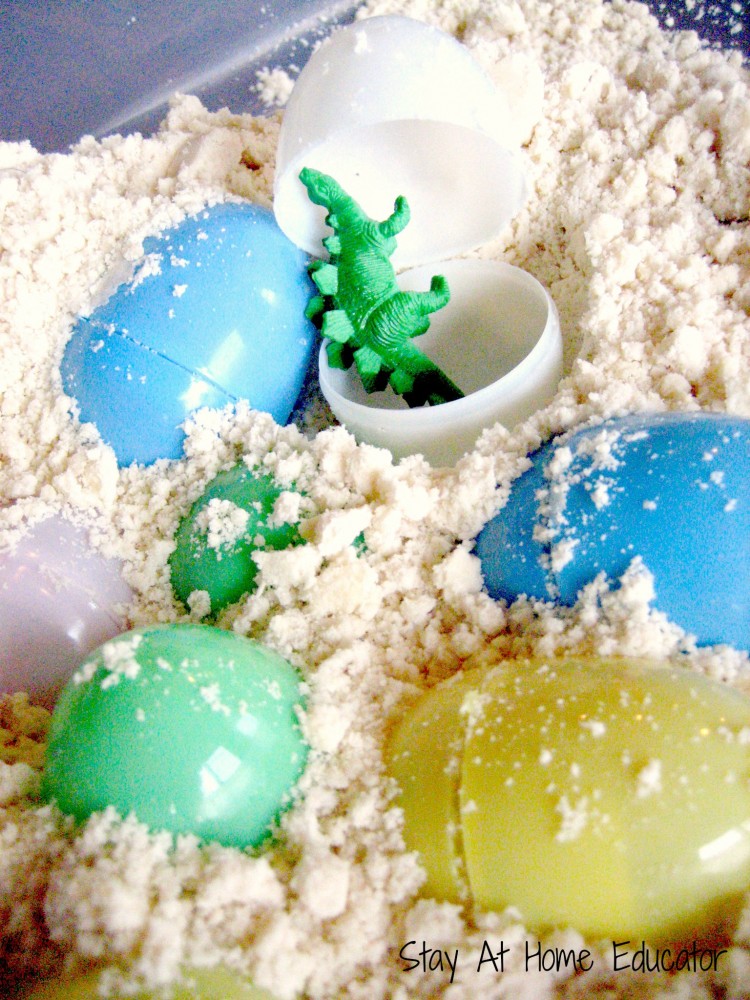 Students practiced rolling out play dough and then pressed dinosaurs into the dough to make impressions, which we called fossils.  In the past I have made dinosaur fossils with salt dough, but found it difficult to really distinguish the impressions, so this year we used homemade play dough. 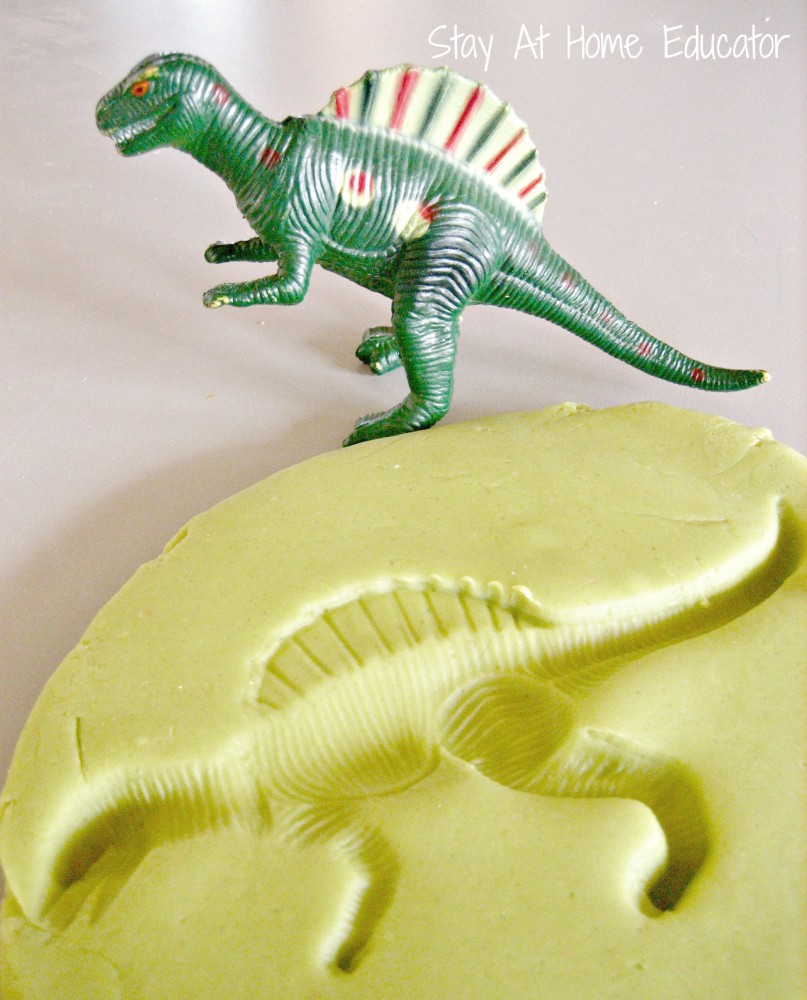 During our study of dinosaurs, we spent some time learning about different kinds of dinosaurs and how they differ from one another.  One day we learned about how various dinosaurs defend themselves.  Students looked at pictures of dinosaurs and shared how they thought that dinosaur would protect itself from a predator.  This lead up to the Anklyosaurus, which has a clubbed tail.  I wanted the students to understand how a club, of weight at the end of the tail would give the dinosaur more power.  So, I gave each student a tower of five Duplo blocks and a straw.  Students tried to knock over the town of blocks using the straw.  (We did gentle taps with the wrist, not big swings with the arms).  Then, students added a small amount of play dough to the end of the straw, about the size of a medium bouncy ball.  They then tried again to knock over the tower of blocks and found that with the “club” at the end of the tail, the Anklyosaurus had a very powerful swing. 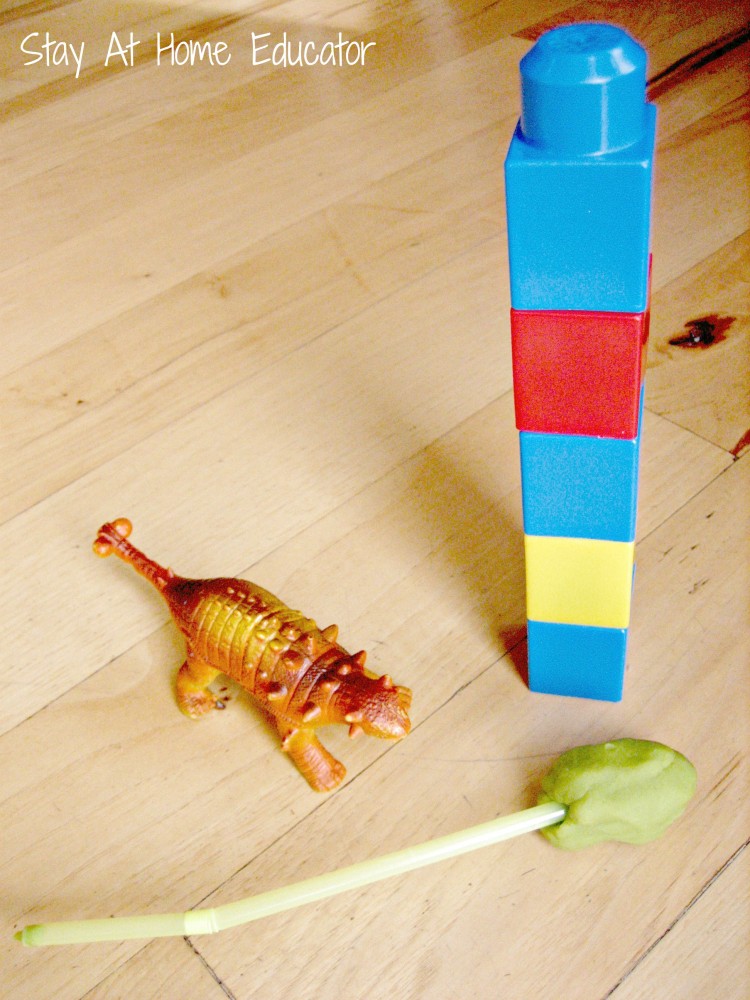 I set out a full length mirror on the preschool table with several bins of different rocks, glass pebbles, fake florist greens, cardboard tubes, and a bin of dinosaurs.  Students were invited to use the available materials as they pleased during pretend play. 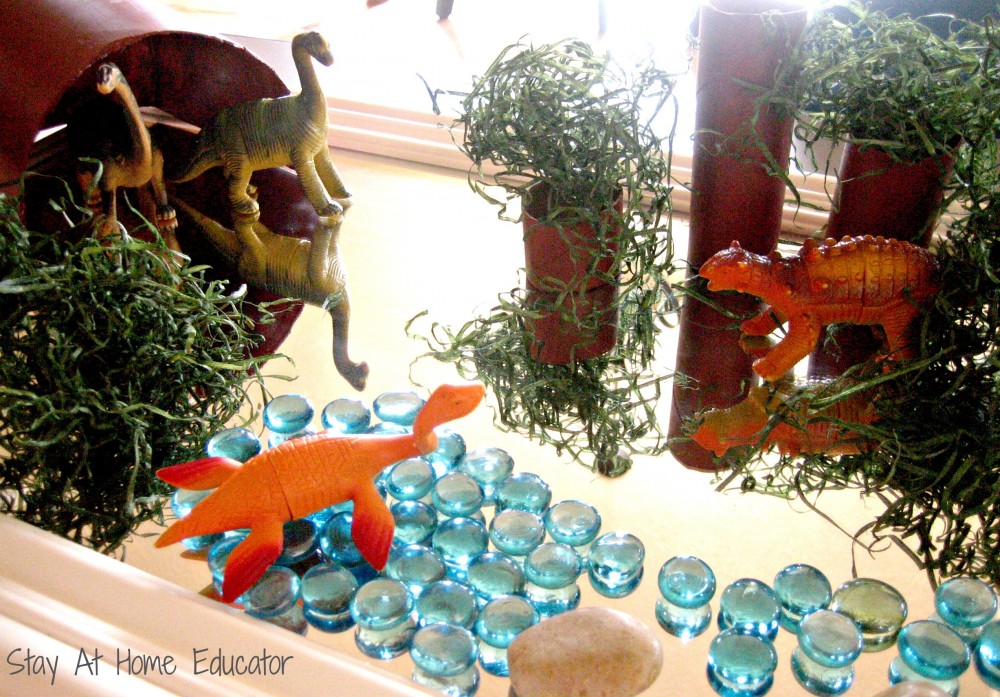 Be A Paleontologist Dinosaur Dig

No dinosaur unit is complete without a dinosaur dig.  Because the weather has been rainy and windy, we could not have our dig in the backyard sandbox, so we used a bin of cloud dough instead.  I buried some dried turkey bones in the cloud dough and gave students paintbrushes to dig up some “real dinosaur bones”, (which I borrowed from a museum 😉 ).

To dry bones, follow these instructions: 1). Roast a turkey or chicken.  2). Clean the cooked meat off the bones, as much as possible.  3). Boil the bones for at least 20 minutes, if not 30 minutes.  4). After boiling the meat and cartilage should be really easy to clean off.  Clean bones completely.  5). Dry cleaned bones at 250° for at least eight hours.  *Tip: don’t try to rush the drying time of the bones.  Drying the bones at a higher temperature will make them brittle and they will break. 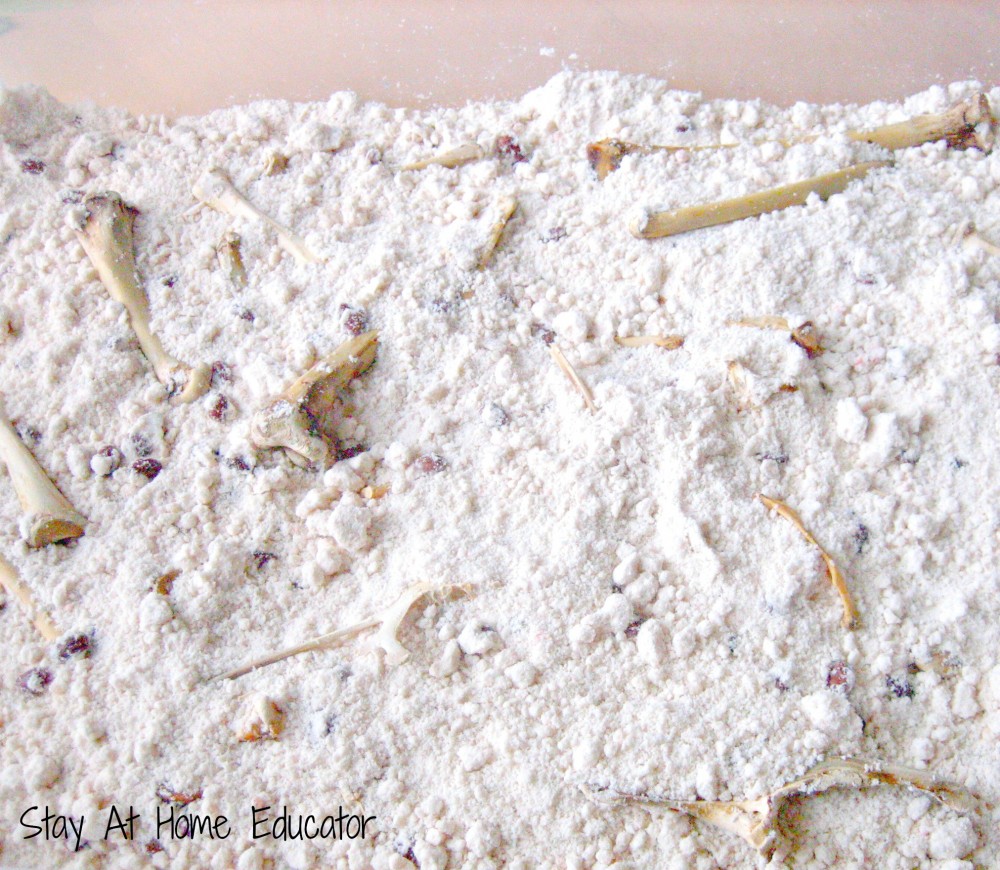 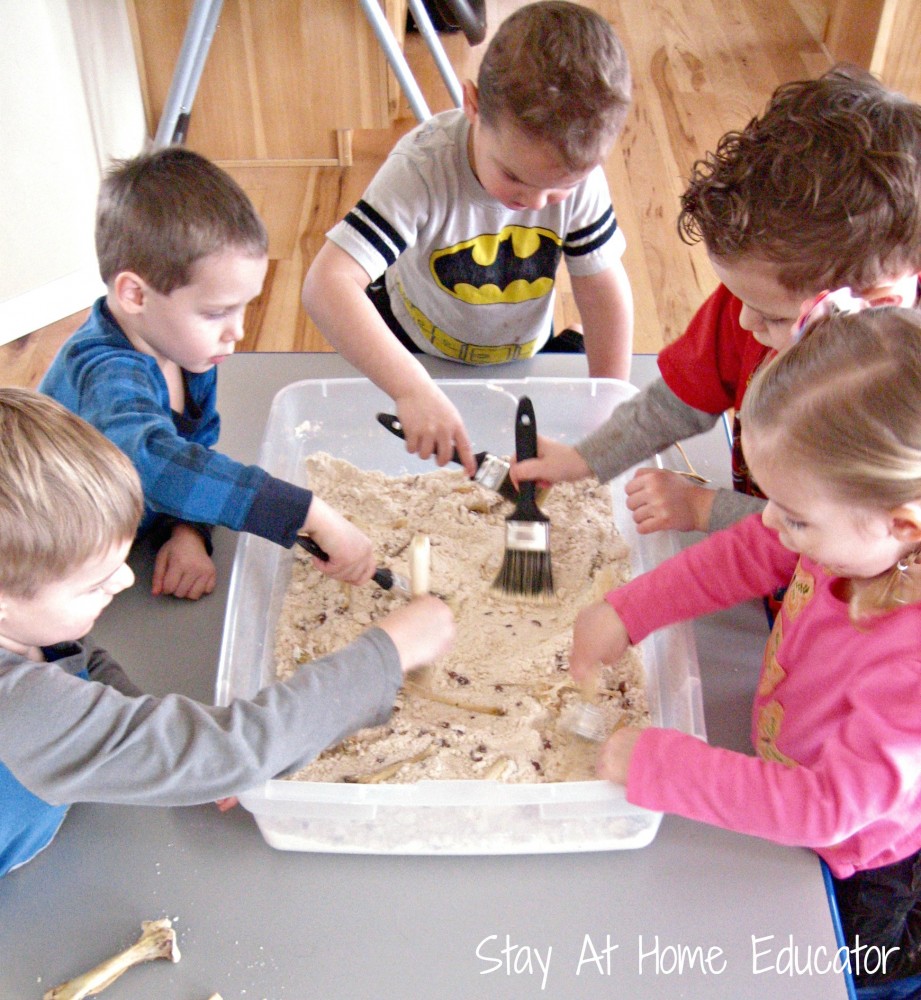 Once my little paleontologists had discovered all the dinosaur bones, I cleaned them off (remember they were covered in cloud dough), and placed them in a wooden bin with some magnifying glasses.  The next day I invited the students to take a closer look at the bones.  We examined each bone and used books of dinosaur bones to try to figure out which bone went where.  This works surprisingly well since dinosaurs actually have more in common with birds than assumed lizards.  Many dinosaurs have a wish bone and the same hips of birds.  One student suggested we try to put the dinosaur skeleton back together, which we did (with a little guidance from the internet since I couldn’t remember where each bone went). 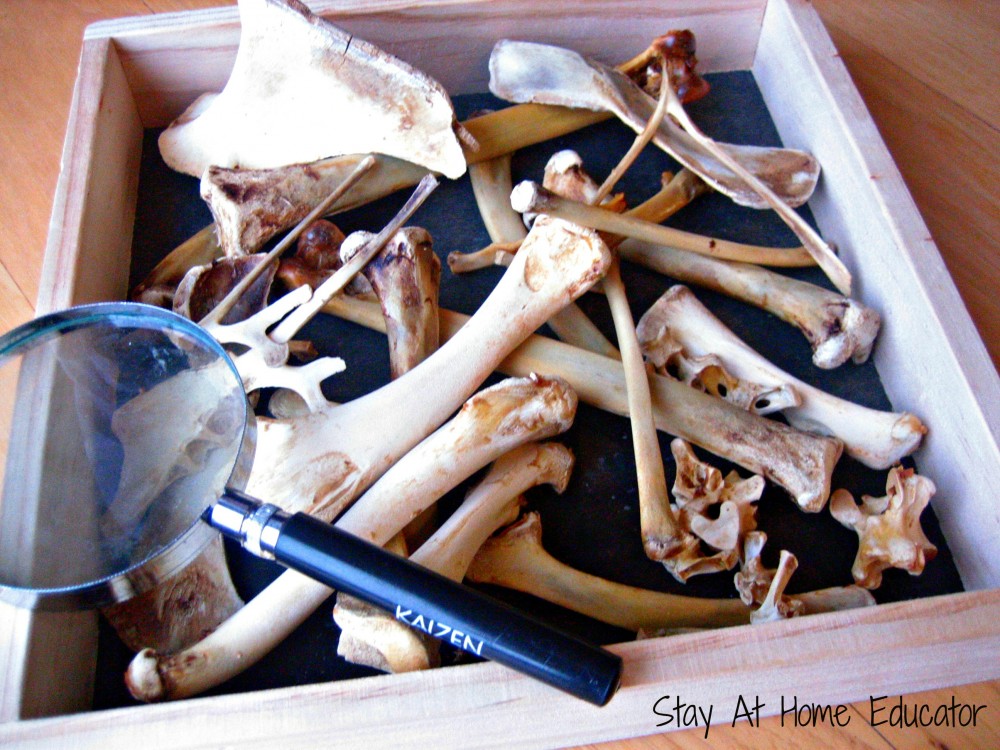 One day, during a transition time when I needed a few extra minutes to set up for our next activity, I invited students to play with the toy dinosaurs and the bones.  I was impressed at how much learning the students incorporating into their playing.  I honestly was expecting the dinosaur play and the bones and magnifying glasses to remain separate, but that didn’t happen. 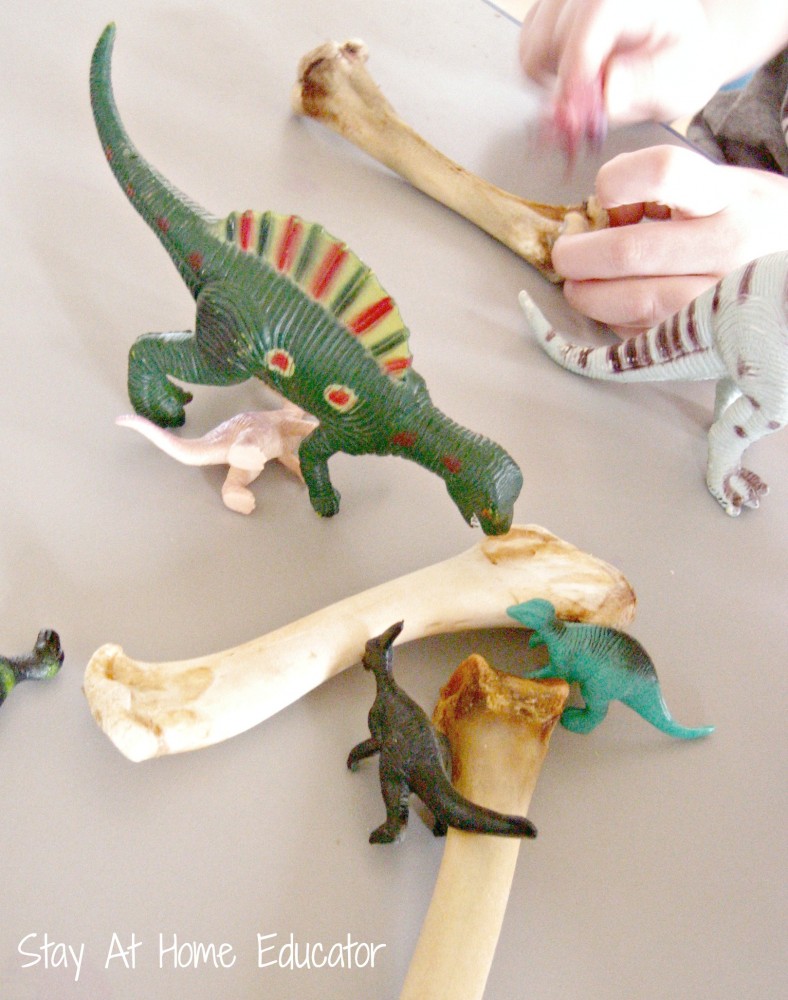 One concept we referred back to several times during our dinosaur study was the idea that some dinosaurs eat only meat, some eat only leaves, and some eat both.  I shared with the students the physical characteristics the dinosaur would have for each category, namely that meat eaters usually stood on two feet, had claws and sharp teeth, whereas leaf eaters typically stood on four feet, had flat feet and flat teeth.  I gave the students a bin of dinosaurs and invited them to help me sort them according to what they probably ate, meat or leaves.  Note that my intention in the activity wasn’t exactly to have students define which dinosaurs were meat eaters and which were not, but more my intention was to encourage students to differentiate the physical characteristics of a set of dinosaurs. 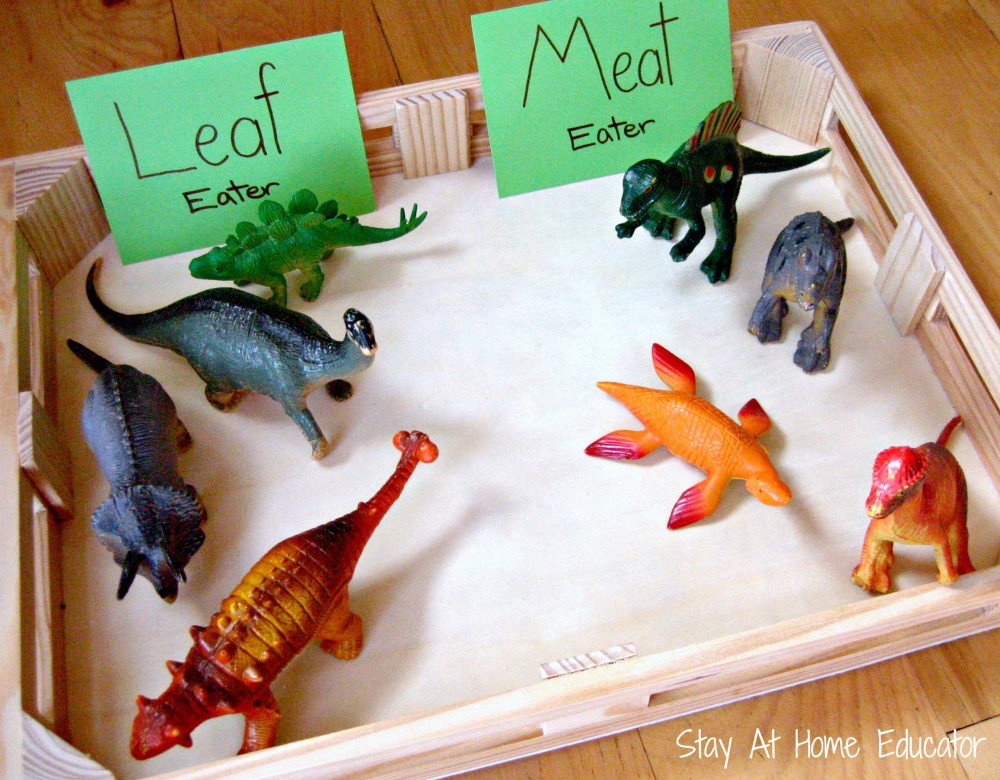 Students were given play dough, rolled it out, then used the toy dinosaurs to make tracks.  During this exploration, I helped the students identify unique characteristics of the tracks of various dinosaurs. 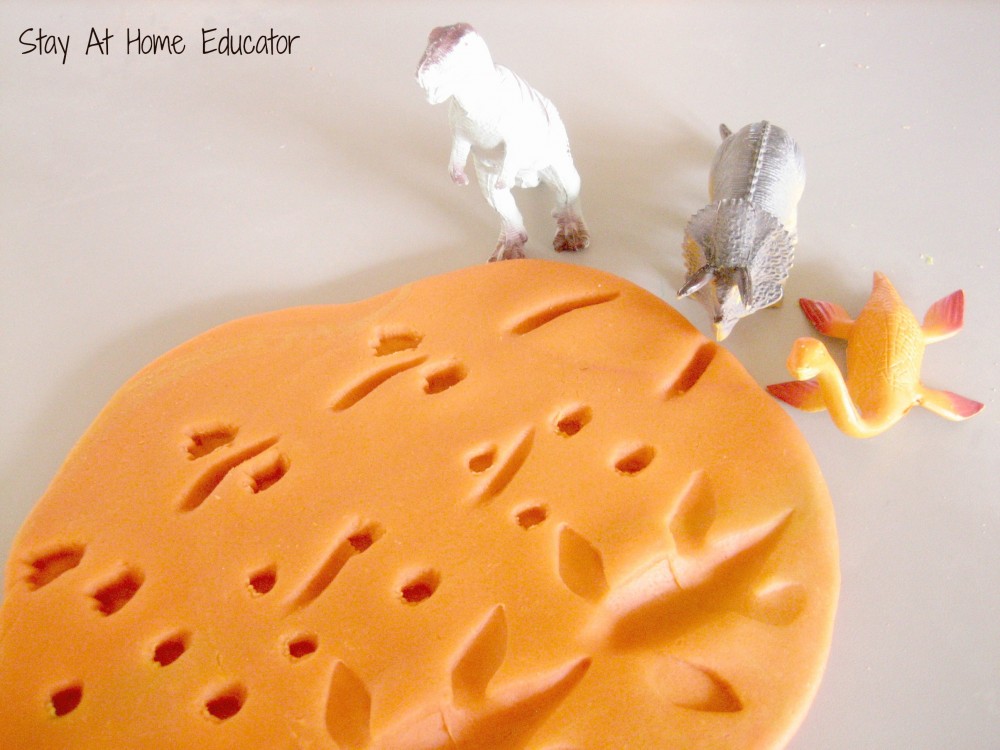 stayathomeeducator.com/
« Phonics Photo Cards And How To Use Them
Initial Sound Picture Sort »