October is a wonderful time to be teaching as it is the month that hosts some of my favorite seasonal-like preschool themes.  Last year’s autumn theme was filled with colorful sensory bins, nature walks and science investigations.  It had a lot of academic appeal to it.  But, this year, I chose a theme that was simply for fun…and it was fun.  We spent a month studying monsters with fun monster themed preschool activities! 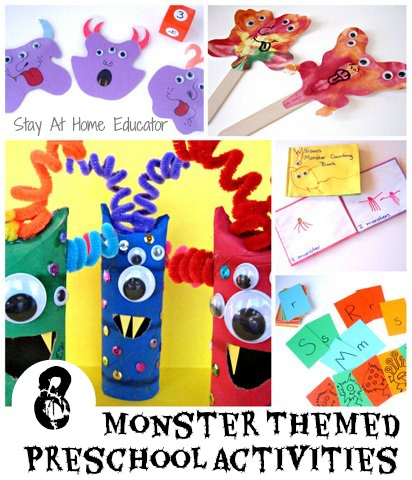 Students painted paper tubes and decorated them with sequins.  I carefully cut a mouth out of each monster with an Exacto knife.  I also folded down the tops to make horns.  The students wrapped pipe cleaner around a pencil to make spirals for hair or antenna, and of course added several googly eyes. 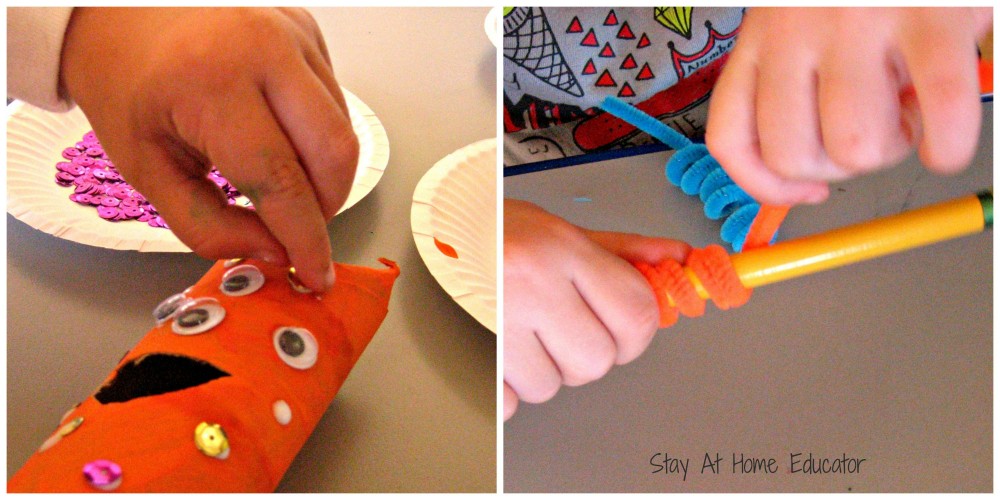 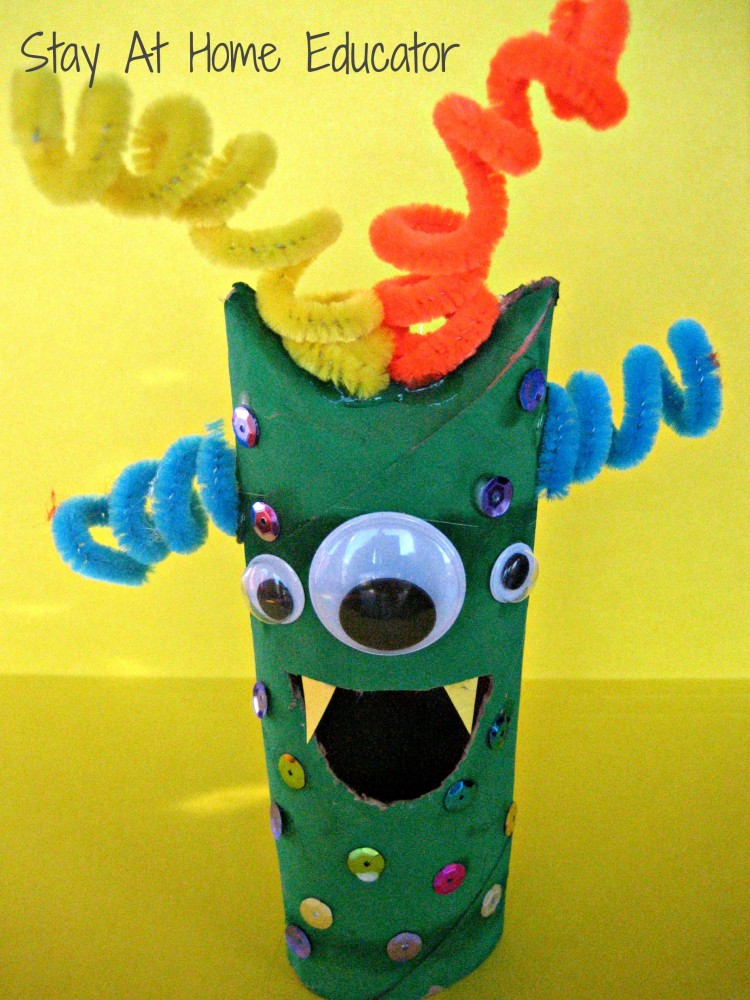 But, that is not their only use.  Students also used the creative pictures to sort the monsters according to their attributes, such as which monsters had horns and which did not. 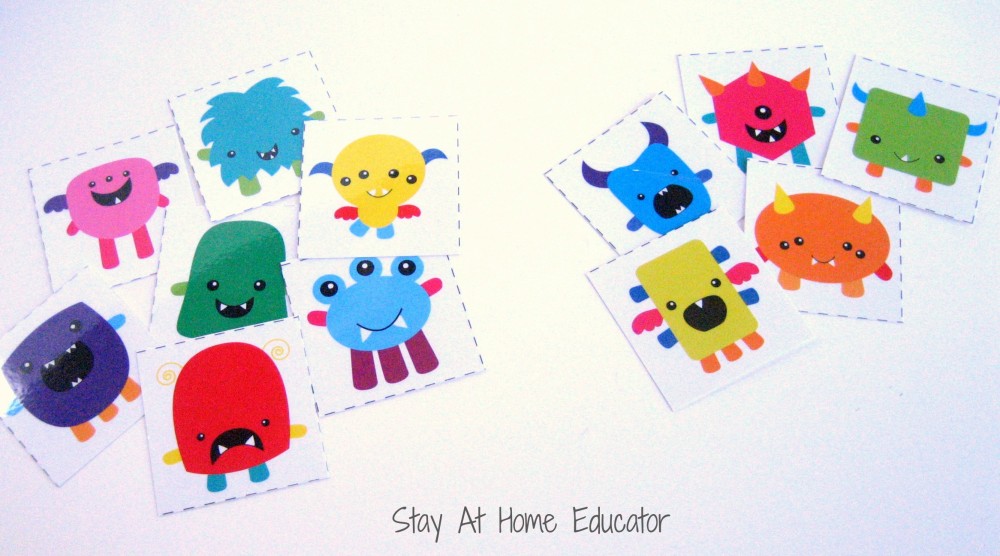 Or, by the number of eyes.  Of course after sorting is a good time to graph them as well. 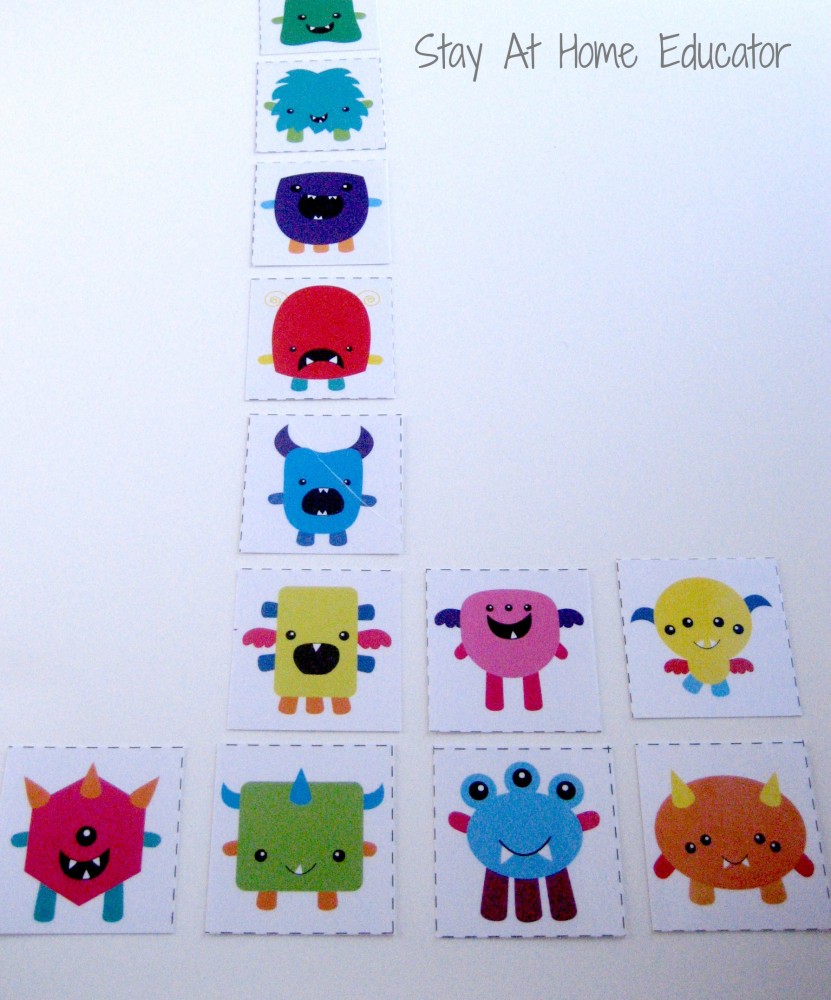 Students used a squish painting technique to create monsters.  This was done by adding small blobs of paint to some paper.  Then, we folded the paper in half, thus squishing the paint, to create a completely new, and mostly symmetrical image.  After drying we cut the image out, added googly eyes are attached them to craft sticks, making puppets.  Later that week the students used their puppets to tell stories. 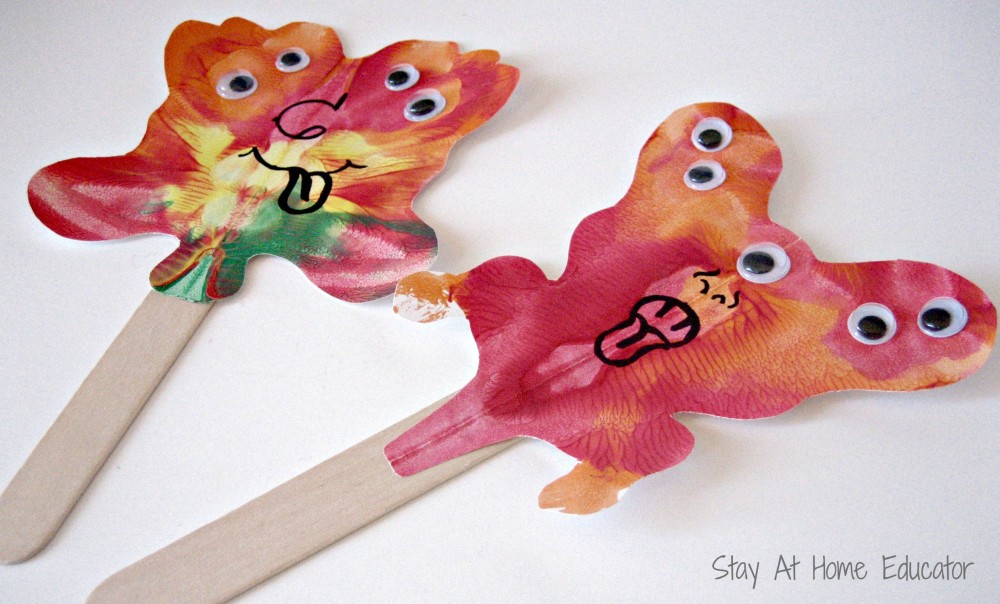 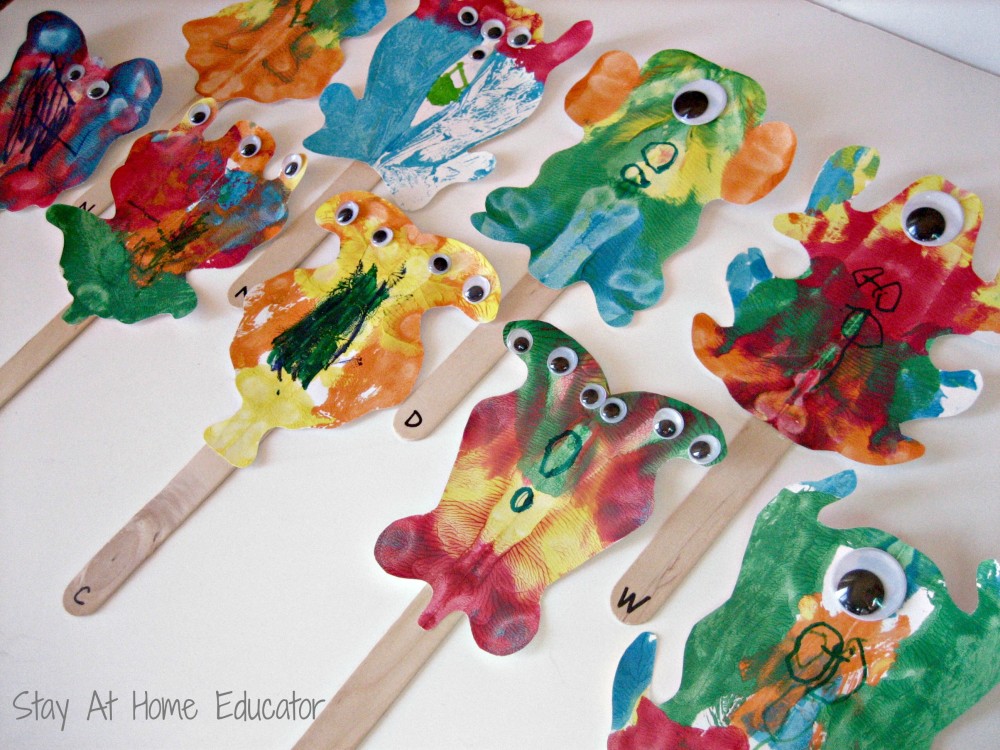 One of our favorite activities this month was the Monster Letter Snatch Matching Game.  I used paint samples to make a collection of letter cards for the game.  I only included letters with which the students were already familiar, and made two copies of each letter in each color, both upper and lower case.  I also drew two monsters in each color.

The object of the game is to make matches of upper and lower case letters in the same color.  For example, an orange R and an orange r are a match.  To play, each student draws a card in turn, trying to collect matches.  If a card is drawn and does not match, the student keeps it, but sets it aside, waiting to draw a card that does match.  If a monster is drawn, then he snatches a letter card and that card and the monster card is placed back into the draw pile.  The first student to make three matches wins the game. 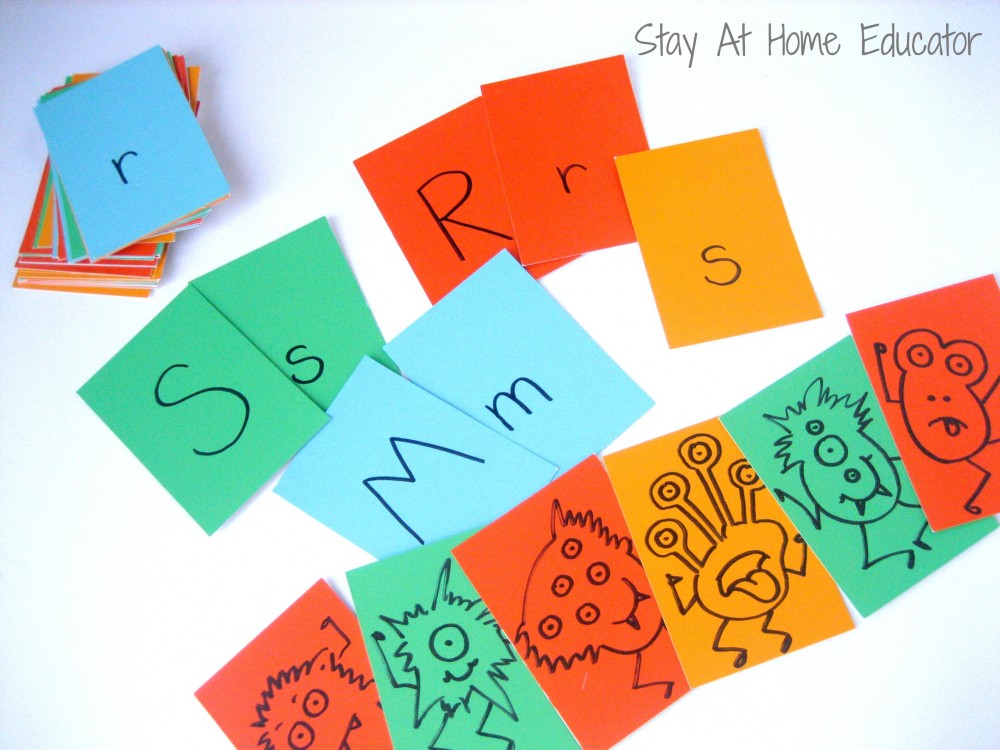 Students made a counting book with numbers from one to ten using thumbprint monsters.  They added legs and arms to their monsters. 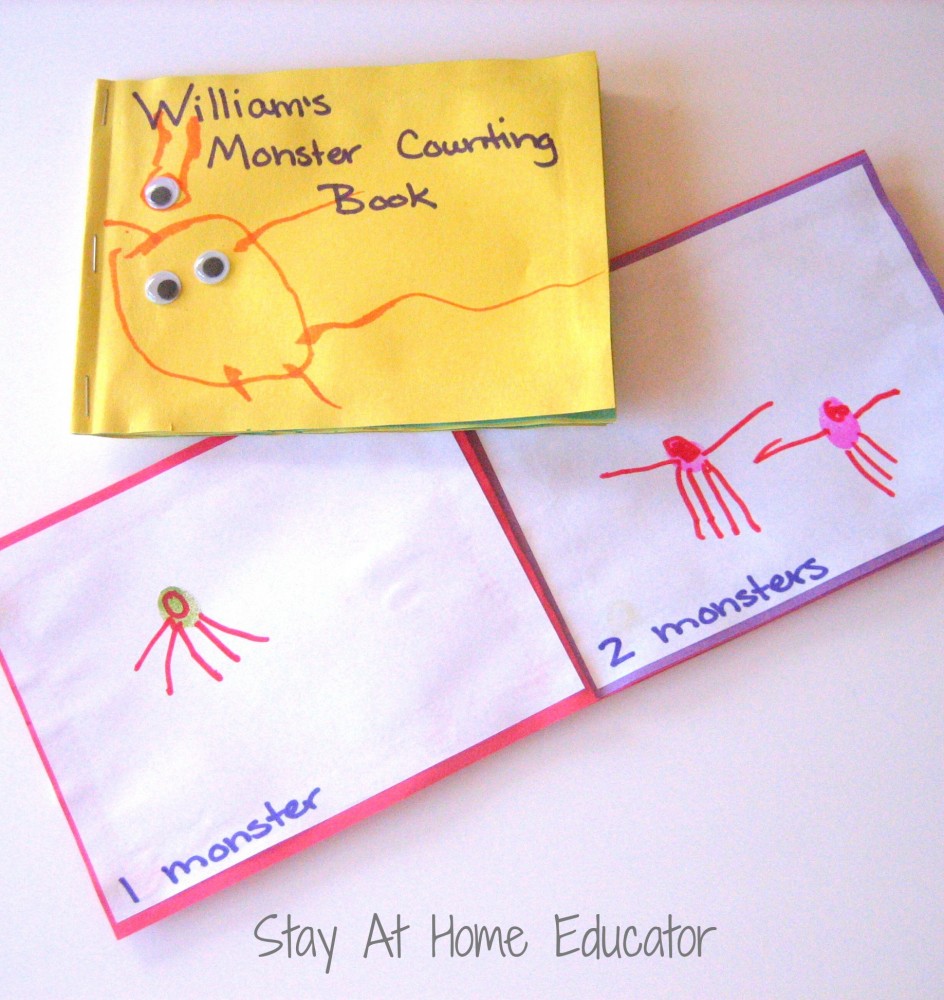 String Painted Monsters and a Story

Students did some string painting to make squiggly looking monsters.  To do this, water down some washable paint and cut a piece of string six to eight inches long.  Wet the string and dip it into the paint.  Hang the string over some thick art paper and drop your hand, allowing the string to press naturally onto the paper.  Allow to dry then add googly eyes. 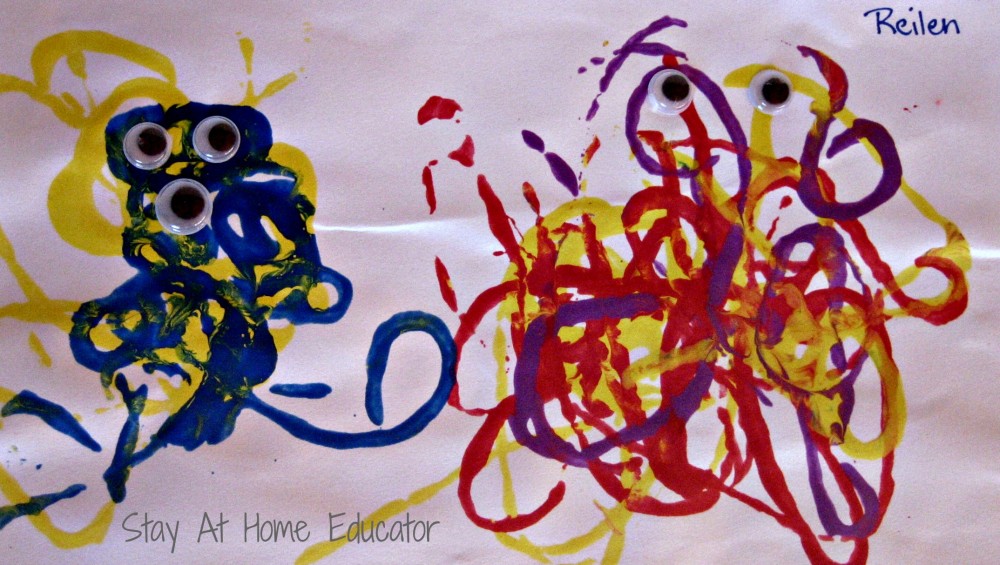 The next day, students dictated a story to me about their monster(s).  I recorded exactly what I was told, but asked some questions to the students who did not know how to start.  The students also “read” their stories to the class.  While the stories the students “read” and the stories they told me to write did vary, I included this part of the activity because I wanted to reinforce the idea that text carries meaning.  I did not interrupt the students, but did read the actual text once they finished themselves. 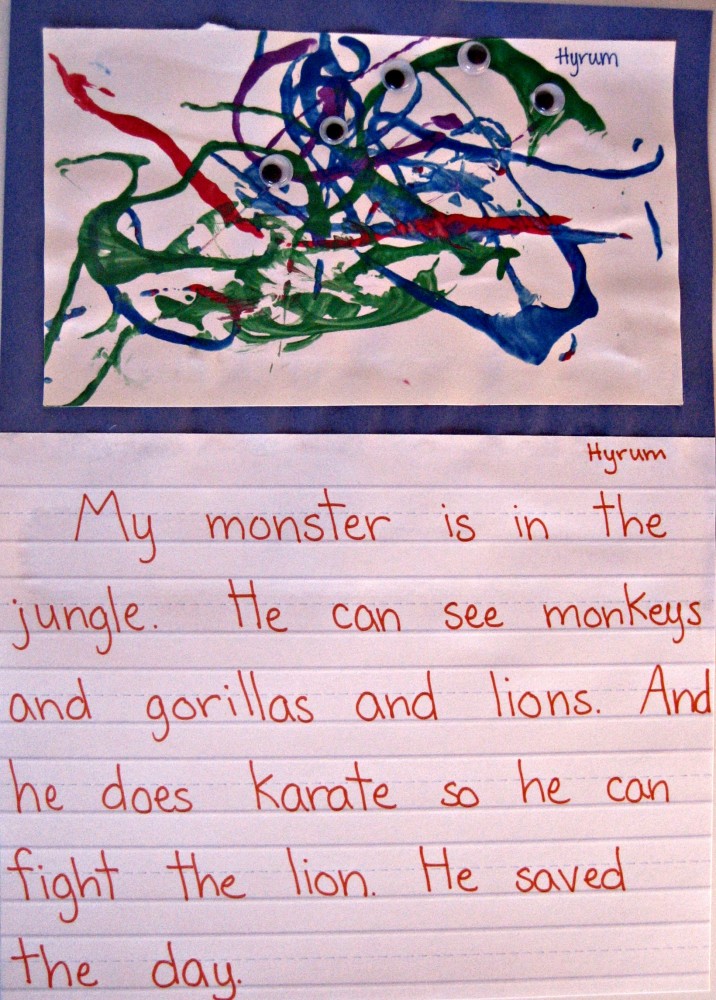 This was a game we returned to frequently throughout the month.  I made some simple monster shapes and added a nose(s) and mouth to each one, and of course laminated each.  The object of the game is to add the correct number of googly eyes to the monster according to the numeral on the dice.

Again, if this is your first time, please join me regularly via  E-mail in the right sidebar, Facebook or Pinterest.