In early preschool, counting and number quantity tends to come quite naturally through play. Once there is a greater amount of number sense skills developed, I like to introduce my preschoolers to five and ten frames, as a way to organize their counting and to help them develop number relationships. 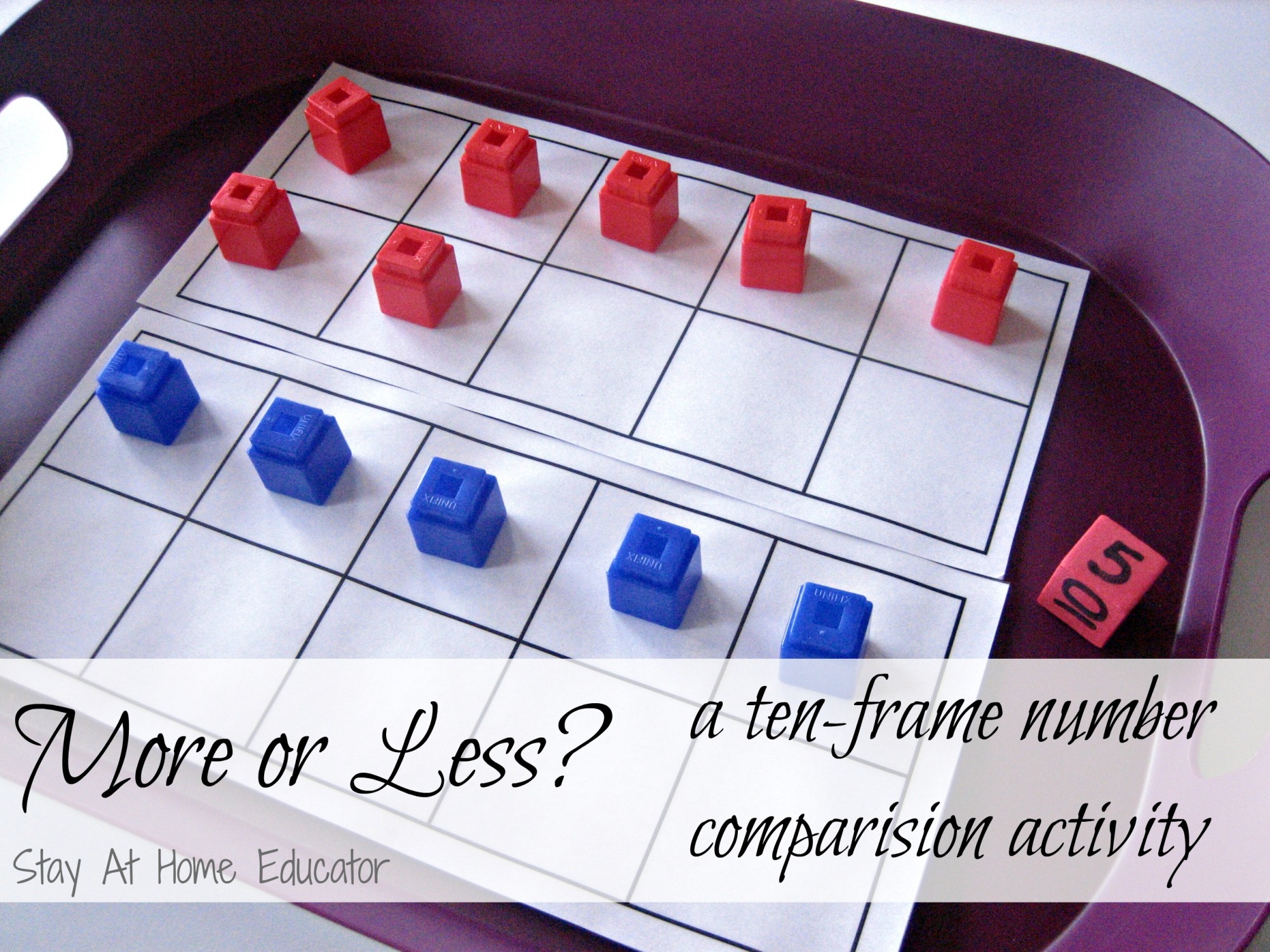 As I stated, I like to introduce my preschoolers to five and ten frame math. Should any of my preschoolers respond to such a format, then I know to add more opportunities to learn about five and ten frame math concepts through our rotating math centers. While some preschoolers may never care for such directed learning, I find that, especially with 4-5 year olds, some will always prefer the organization that the format offers. I have posted about using a ten frame to compose ten, and this activity, More or Less? is just another activity that develops number quantity skills for those students who are ready for more formalized math instruction.

To play More or Less?

This ten frame game can be played with two players, or it can be an individual activity. The idea is simple.

Roll the dice. Count out the corresponding number of counters onto the five or ten frame. Use only one color counter for each frame. I like to tell my preschooler that the counters don’t like to share squares, so only one counter for each square. while it doesn’t actually matter where the counters are placed (because the quantity remains the same), I have my preschoolers place them in rows from left the right, without skipping any spaces. This makes the quantity comparison easier to recognize.

Next, roll the dice again and count out the corresponding counters, of the second color, onto the ten frame.

Now, we must compare the two frames to see which one has more, and which one has less. Sometimes, a child will have no problem identifying which ten frame has the greater amount, but sometimes, it can be a little tricky. This is why I prefer to use unifix cubes as our counters. After the correct number of cubes have been counted out onto the frame, children can snap the cubes together to make towers to see which is has more or less. I only encourage this when the child is completely stumped.

The reason for this is because one of the benefits of ten frame math is that the quantity is organized onto a grid. Not only can children compare which ten frame has more or less, but it also helps them develop number sense relationships, specifically for composing and decomposing ten. It helps them understand that the more empty squares that are left on the ten frame, the smaller the number is and the further away from ten it is. (We like counting to ten because ten, and multiples of ten are “friendly” numbers).

The activity continues until the child looses interest. Having a preschooler practice this activity when there is no interest will not result in learning, however making such an activity available to students who are ready for such math play will result is a great amount of learning.

My own children have really responded to ten frame math practice, especially William who is very mathematical minded. Following are some great ten frame variations we have had great success with.