This preschool lesson on composing ten is probably the easiest preschool activity that has ever existed!  the object is for students t link together unifix cubes, or legos or blocks, in towers to make ten.  This is such a valuable lessons for preschoolers and young mathematicians.  You might be surprised at the learning process that took place at my preschool table that day. 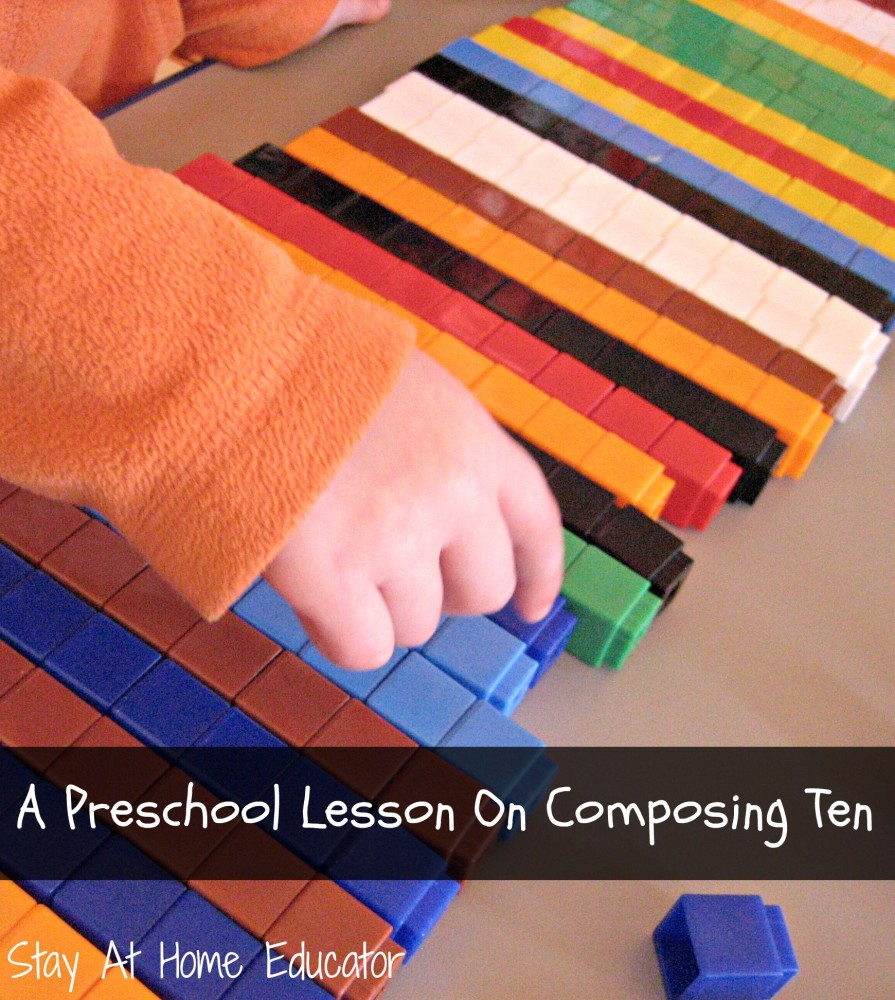 The other week, my children asked to play with my classroom set of unifix cubes.  Unifix cubes are small, one inch square blocks that link together.  You can find them on Amazon, or most any educational resource store. They are one of my favorite mathematics manipulatives because of their versatility.  Now, of course when my children ask to play with something that is so open-ended and supportive of an array of developing math skills, I can’t say no.  So, they played and played.  William and Corinne spend the better part of an afternoon playing with these simple linking cubes.

We didn’t have time to clean up properly before heading out the door to soccer practice, (my mistake), so instead of returning them to the box stored in towers of ten, we threw them in, just containing the mess within the box.  The following morning, this lead to an excellent preschool math activity on composing ten.

I simply set the un-linked cubes on the preschool table and gave the students three directions for playing with the unifix cubes. 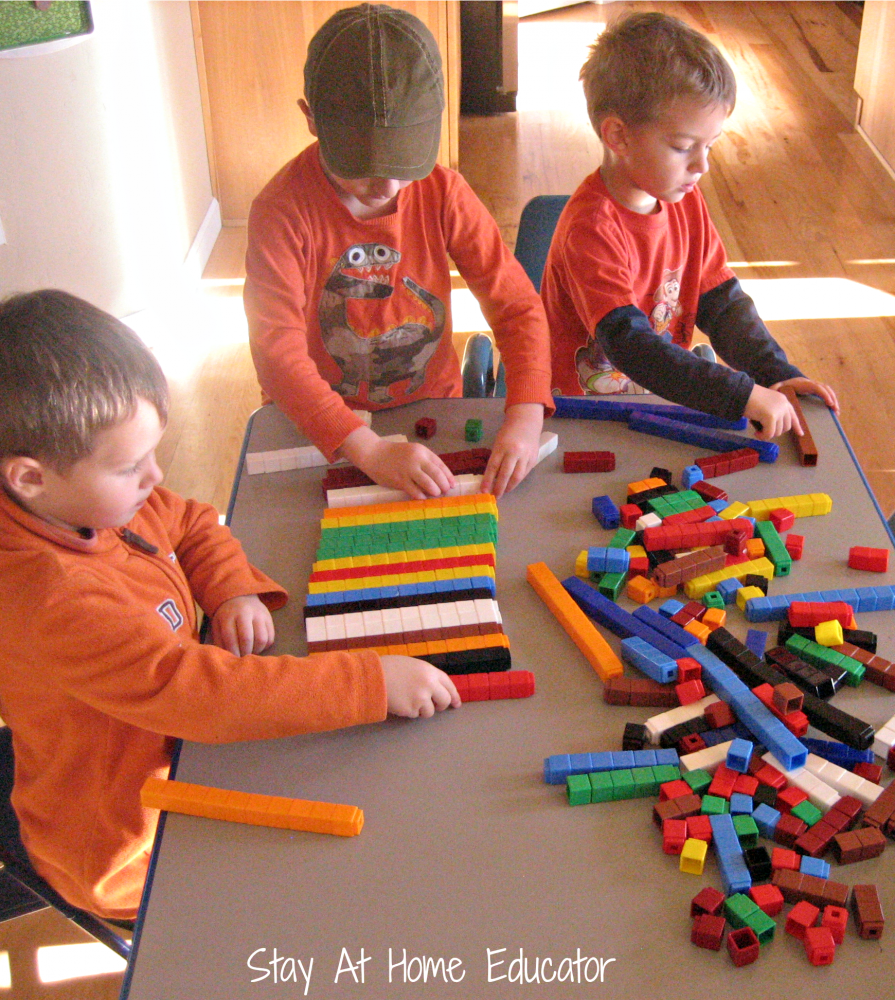 The students immediately set to work making towers of ten cubes each.  This activity gave students multiple opportunities to count and compose ten. They had to recognize colors and sort them according to the color needed for each tower.  I was amazed at the mathematical conversations that began taking place among the students!  This is one of those activities where as a teacher I was truly able to step back and play facilitator while the children stepped up and appropriately directed their learning. 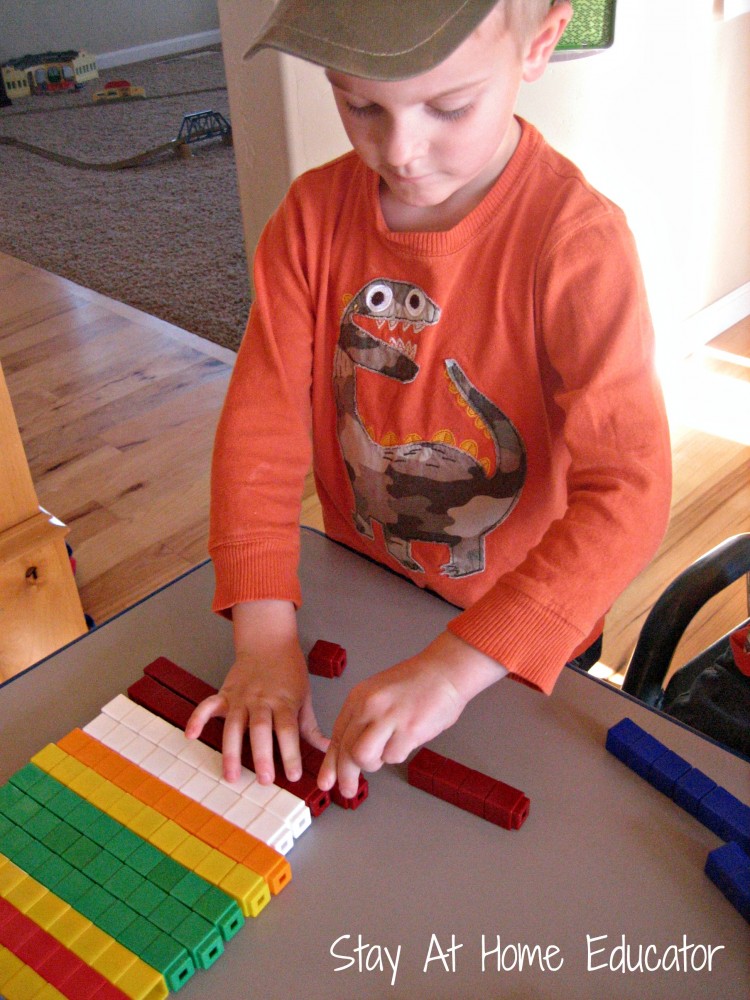 In the above picture William is adding a cubes to a few towers that were short of ten.  He came about doing this by counting the cubes in the towers and finding that some only had nine, not ten.  Another student (we’ll call him Jack) thought that instead of counting the number of cubes in each tower he would simply build towers to looked to be about the same height as the one of ten.  This is an important concept in itself because it demonstrates that Jack understood that if all the towers  had the same number, then they should also be the same size. 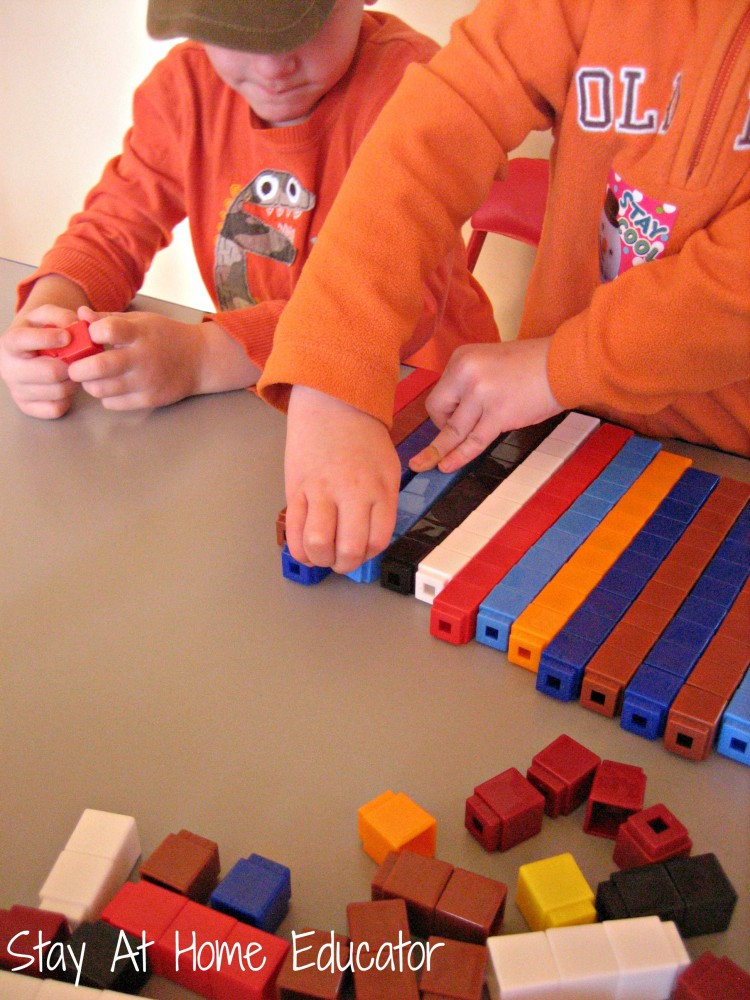 Here, Jack is reviewing his work by counting the number in each tower out loud, and William is counting along with him, checking Jack’s work.  At this point, I continue to supervise the work, but I do not interject to correct Jack when he continues to miscount the number of cubes in some of the towers.  By not interjecting, I am allowing other students to identify the mistake and make the correction themselves.  This is an important part of the process of learning, especially in math. 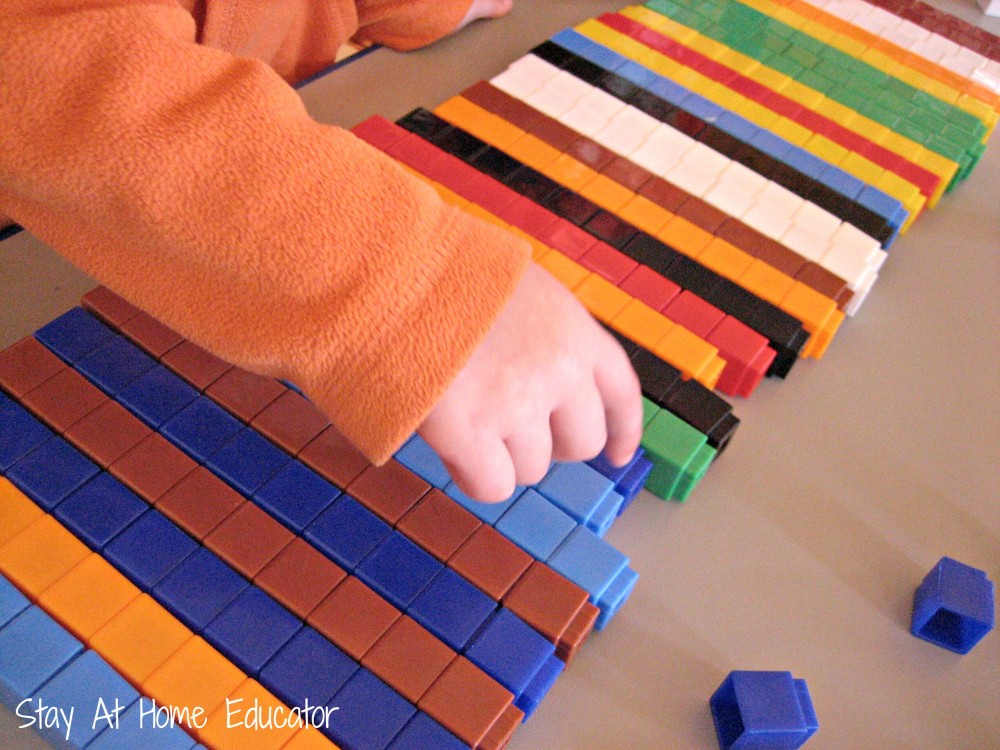 Above, Jack counts the number of towers that have been built.  He counts out loud, and notices when he makes a mistake, at which point he starts over.  He does this three times, and it is after the third time of miscounting and Jack moving to start over that I interject and model counting for him.  “Oh, yeah!  That’s what I meant!” Jack calls out, and then continues correctly. 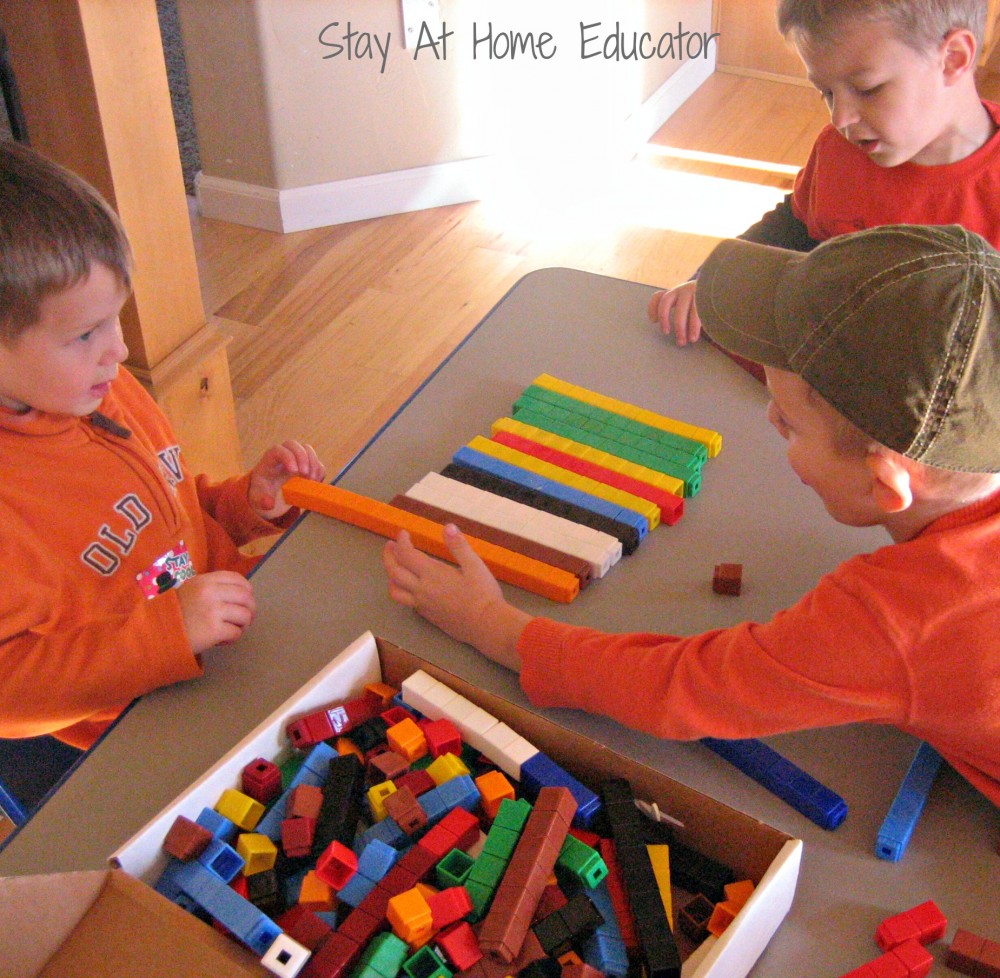 Above, William decides that it would be faster to build taller towers, and Jack corrects him. 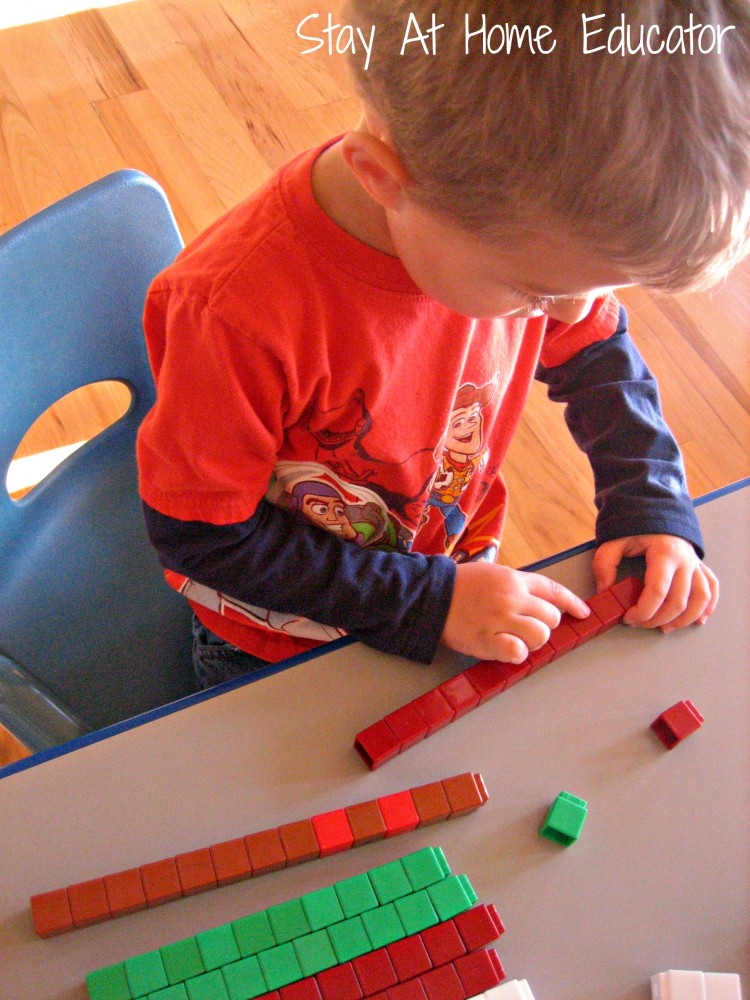 Above, another student, who I’ll call Sam, works more independently on building his towers of ten.  You can see he has made a mistake in building a tower thirteen, with two mismatched cubes.  This was quickly corrected by the other students in the class.

Throughout the course of this activity, I would question some of the students about the reasons behind what they were doing.  Why does this tower seem to have more?  Why is this tower so tall?  Which towers have the correct amount?  Will towers of ten always be the exact same size?

Putting together all fifty towers of ten took the students about twenty minutes, and it was some of the most valuable mathematics instruction I could have offered that day.