During our Around the World theme, we got our “passports” stamped in Egypt when we “visited” the Great Pyramids of Giza. To help my preschoolers understand how cool these giant pyramids are, we tried to make our own pyramids out of paper cups. 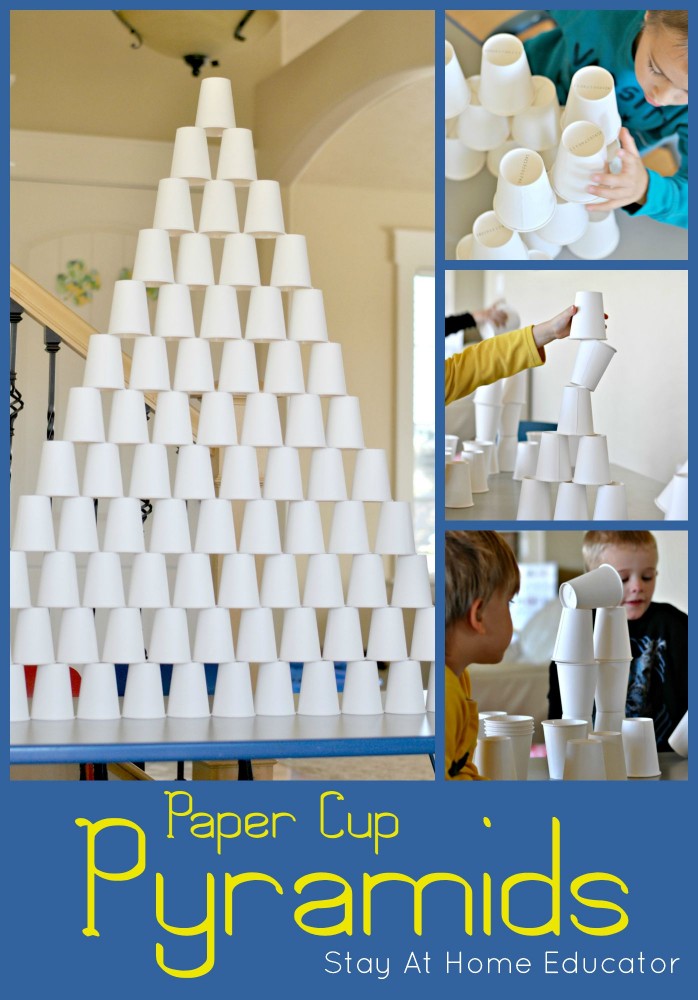 As it would turn out, making giant paper cup pyramids was difficult, but what a great STEM activity to supplement our Around the World theme. The preschoolers attempted several different strategies and methods of building with the paper cups. They ran into some common problems with building that had to be remedied, and I loved watching and helping them problem solve!

Literally all you need for this activity is a package of cups and a work space. I had my preschoolers work at the preschool table, so they could stand as they built their pyramids, but once we made our class pyramid it quickly grew too tall and I found myself spotting (standing behind them for safety) children as they added the top layers while standing on the low table.

I began by giving each child about 20 paper cups and inviting them to build their own pyramid. Many of the children began by making towers, so we had to do some problem solving about how to make our structure shaped more like a pyramid with a wide base. The children then tried stacking the cups end to end, right side up and upside down and with each result the children went back to the “drawing board.” 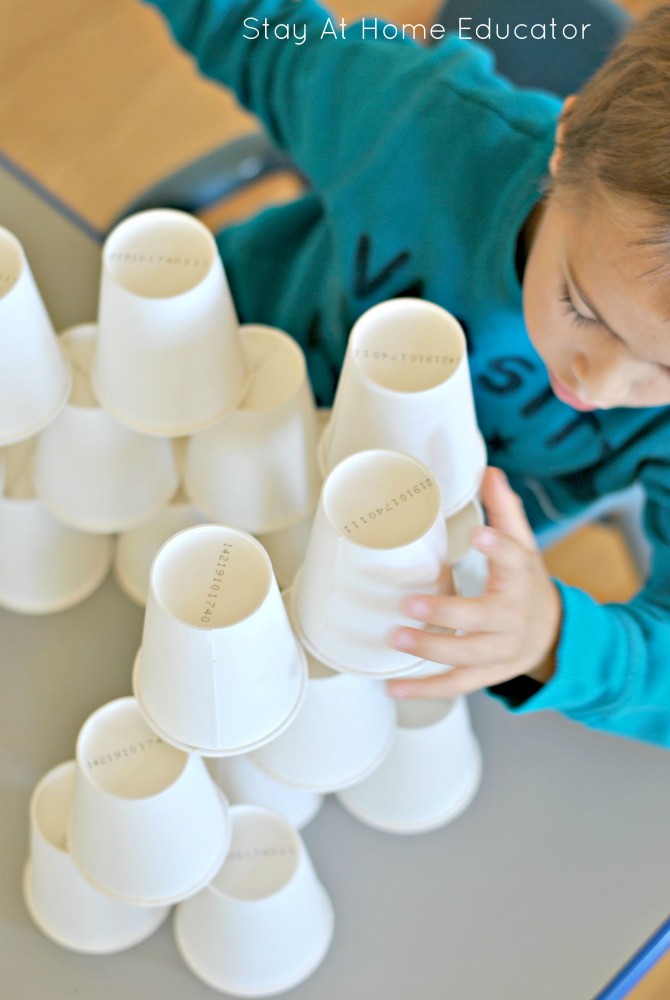 Then one preschooler, in attempt to make his pyramid, ended up making more of a wall because he ran out of cups to build it tall. His base was nice and wide, but too wide for the limited amount of cups he had. He was on the right track, though, which inspired the other children to build using his same method. Soon all the children had tall walls, but nobody had a true pyramid.

“Hey, I know!” a preschooler shouted. “We can share our cups and build one big, big, big pyramid. Then we’ll have lots of cups!”

As the preschoolers worked together to build the pyramid, we ran into a few other problems. First, they made the base too long and wide, so again, despite sharing about 97 paper cups, they built a wall and not a pyramid. (I know, 100 would have been perfect, and a perfect activity for the 100th day of school). They brainstormed solutions, which mostly ended in asking me if I had any more cups. This lead into a very good mathematical discussion about if we pull some cups from the base to add to the top our overall structure will change shape, even though we are using the same amount of cups.

But then that brought about another problem. How many cups do we remove from the base to build up? Do we take ten, twenty, or two? We didn’t know. While some preschoolers wanted to take closer to twenty, we decided as a class that maybe taking less is a better approach, because we can always take more if needed, but it would be more difficult to go back and make out base bigger. 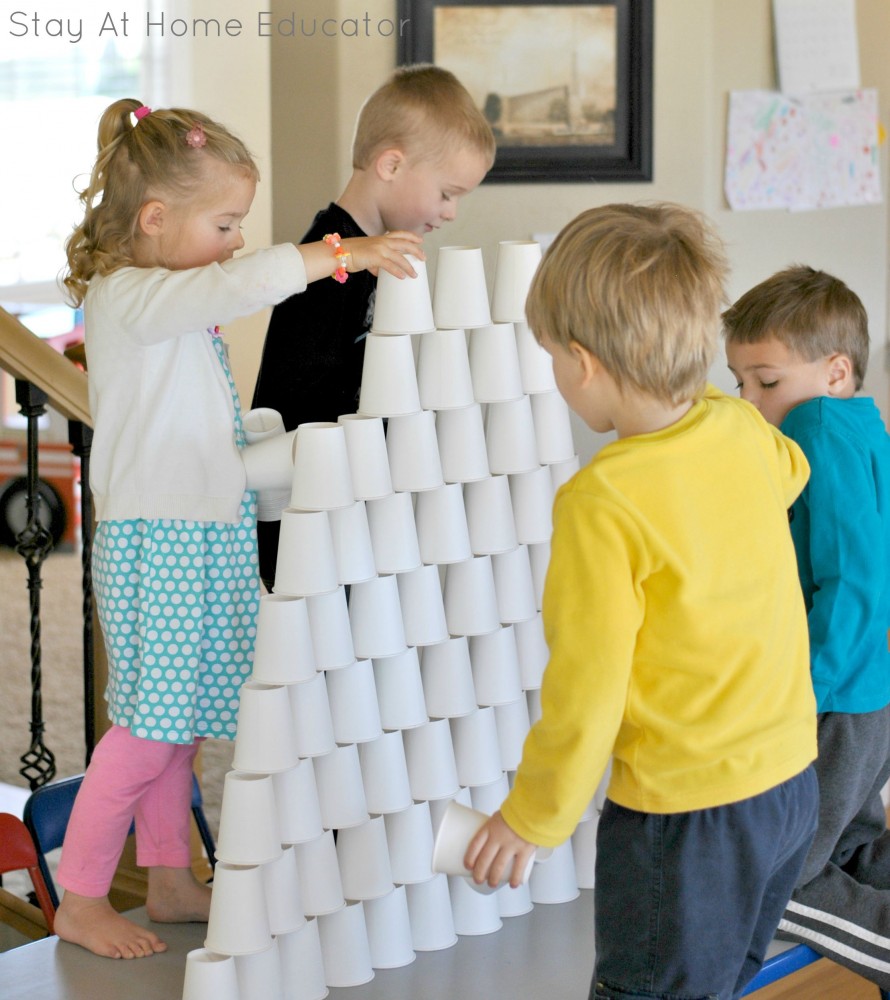 Finally, we got the right sized base to build our pyramid as tall as our cups would allow. (For older kids, they could figure out the exact number of rows needed and width of base needed before ever building, but for my preschoolers I felt that trial and error was the best method). 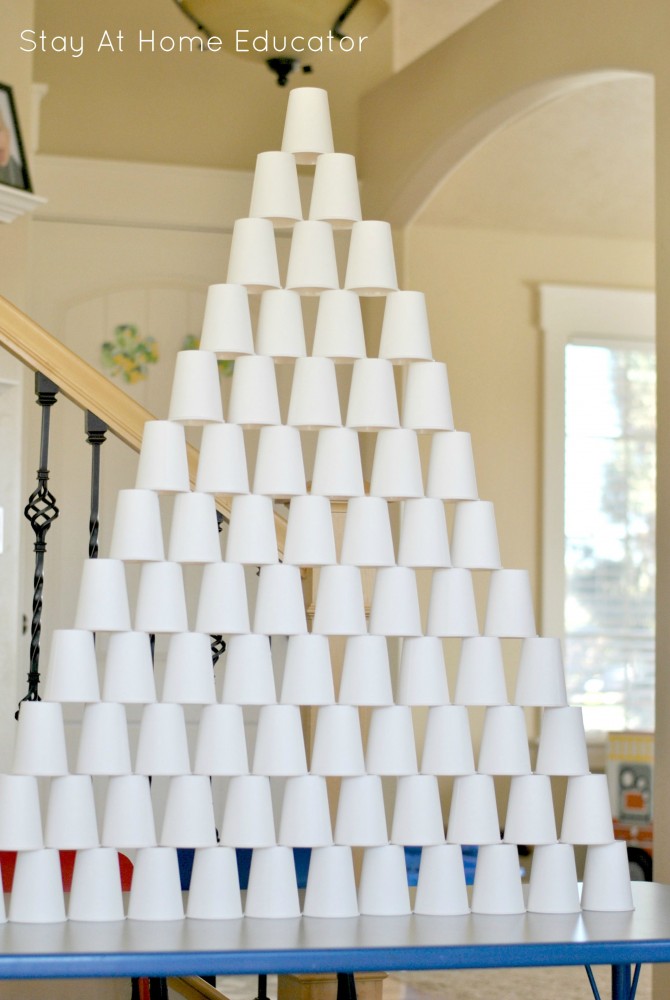 Books about pyramids and building