What does a preschooler do after he has built a tower? He knocks it down, of course! There’s a lot of fun to be had watching the blocks tumble to the floor, as they clatter and clang and make a jumbled up mess, but preschoolers love watching (and making) all sorts of objects fall. This super science activity about gravity is quick to put together, requiring only household items, and teaches preschoolers all about the most basic of forces: gravity. 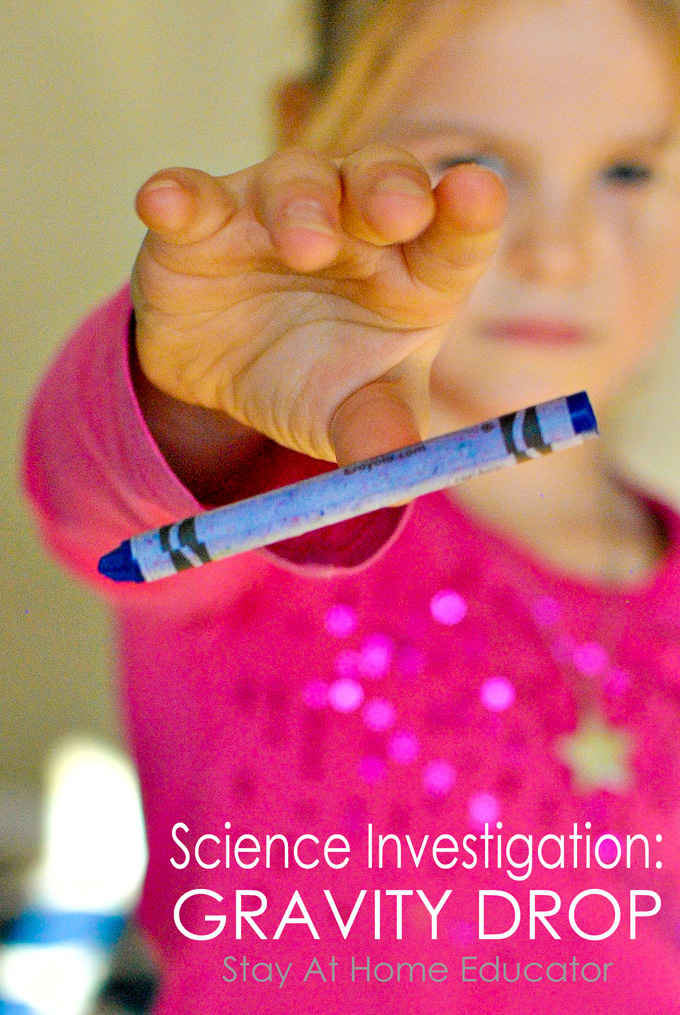 The other day, my two-year-old grabbed a handful or crayons, held them above his head and then dropped them on the kitchen floor.

The crayons scattered about, some of them breaking in half. My three-year-old thought this was a great new game, and he also grabbed a fistful of crayons, stood on a preschool chair, and watched them fall from his hands as they tumbled to the wood floor, scattering under the table and several breaking in half. He got down from the chair, shoulders slumped, as he realized he had broken a yellow crayon, his favorite color.

Now, I could say I used this as an opportunity to implement all those “positive parenting” techniques you see floating around on various Facebook posts, but I actually said something more like, “Well, that’s what you get for dropping your crayons. They are going to break.” And then I snuggled my young preschooler and helped him clean up his mess, promising that his beloved yellow crayon would still work despite its smaller size.

Meanwhile, my two-year-old grabbed a pile of papers from the table and…you guessed it…dropped them from above his head, watching them flutter and skate through the air as they gently fell to the floor. His grin took up his whole face, and before I knew it, he was looking for something else to drop and watch. Perhaps the abandoned bowl of cheese crackers or the bucket of one-inch square wooden blocks in the next room?

I needed to get ahead of this, so the only solution was to create an impromptu activity about gravity which we call Gravity Drop.

It was a success, we repeated it the next day in preschool.


An Activity about Gravity

Do you have a few minutes? Because that’s all it take to put together this gravity activity and you can practically use anything from around the house or classroom. 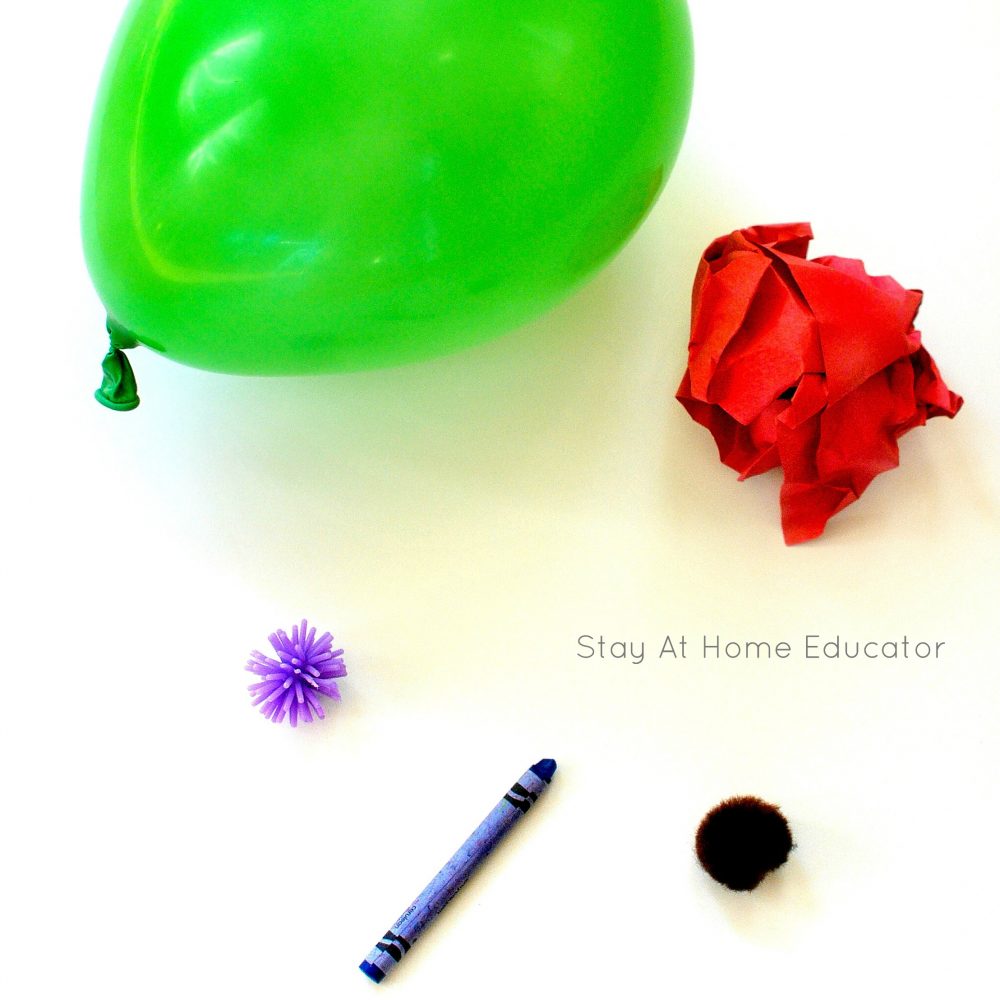 This is what we used: a balloon, a crayon, a pom pom, a crumpled piece of paper, and a mini sensory ball.

Simply prepare items as shown in the photo above and set aside in a bin or sorts to contain them. Then invite your preschoolers to join you.

Begin by asking the children what they know about the items. Invite them to handle them, exploring their texture and weight. Observe how the children play with the items before asking for them to be returned to the bin.

Choose an item and hold it at shoulder height and drop it to the floor. Ask the children what happened when you let go of the ball. Try it again with another item and ask again. Did the same thing happen? Continue with each item in the bin, asking the children to help you drop the items. Lead the children to identify that all objects, when let go, will fall to the floor.

Then, invite the children to help you drop them again, this time watching how quickly they fall. 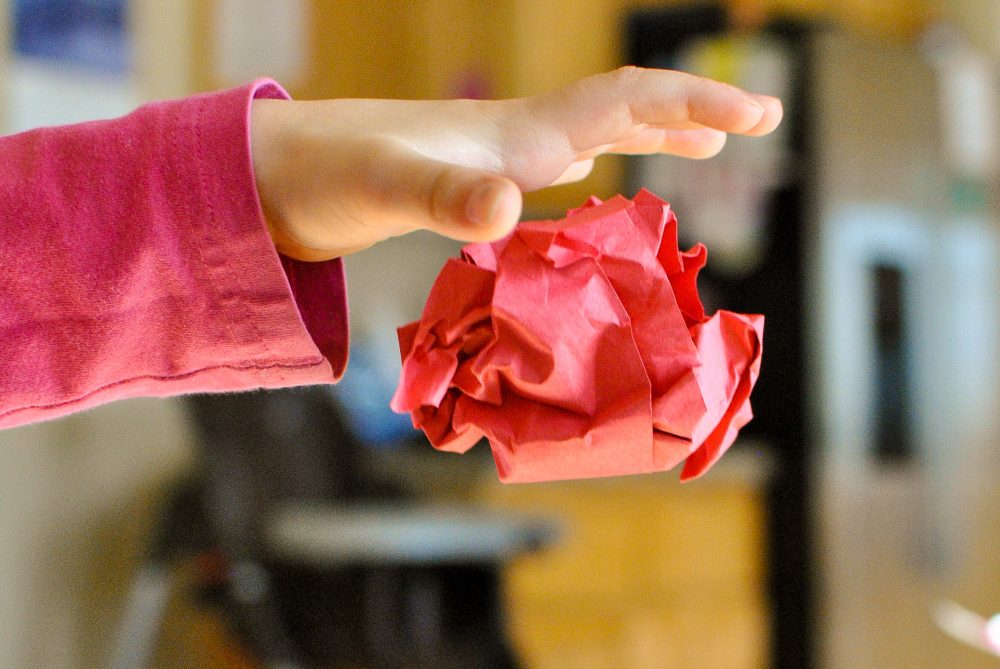 Now, it’s important to have a range of objects that will clearly fall at different rates. Ask the children to share what they notice about how each item falls, if it is fast or slow, and what they think might make it so.

Not “Just” a Preschool Teacher
72 of the Best Picture Books that Teach Math
Science Investigation: What is Yeasts Favorite Food?

My preschoolers had a blast with this activity, as did my toddler! And they were more insightful than I had expected. They did notice how the items fell at different rates, and even tried tossing some in the air to confirm their original observations.

I pulled my class together for a quick circle time to share with them the science behind what they were seeing. They discovered that, yes indeed, all objects will fall if let go, or in other words, what goes up must come down. I explained what gravity is in it’s most simple form. Gravity is a force that pulls things to the center of the earth, or in even simpler terms, to the ground. It’s what makes us stick to the ground and not hover above it. We talked about how some objects fell faster than others, but they all fell. The preschoolers also noted how the different items made different sounds when they hit the floor, some louder and some softer.


Facts for Preschoolers about Gravity

Need some help explaining gravity? I’ve got you covered. Here are some simple facts to explain gravity to little minds.