Despite the fact that most states do not have specific standards that support preschool algebra, many educators and parents are providing their students and children with basic math activities that fall under the umbrella of algebraic reasoning.  Sorting is a common and well used preschool math activity, and for good reason.  It supports the analytical thinking that accompanies algebraic skills.

Sorting and classifying is an important critical thinking activity for young children because it requires analytical thinking and using concise and specific language.  During sorting activities children have the opportunity to decide on groupings and determine relationships among those groups.  For older children, open ended sorting helps create autonomous thinkers.

When children first begin sorting, (sometimes as young as 15 months), they begin by discriminating one attribute, often beginning with color.  As children develop, they then begin to sort by other attributes that are more fitting for the objects being sorting, such as sorting by type with plush versus plastic toys, or storing by size with socks.  It is important for parents and teachers to be facilitators in a sorting activity.  This allows children to think divergently.

Facilitators make suggestions, not demands, during the activity, much like the following:

This last question is an interesting problem children come across when doing open ended sorting, which is sometimes very difficult for children.  It will happen more quickly if a facilitator introduces the idea first.  Eventually children begin to recognize that objects can be sorted and classified in many ways, and soon they will invent new ways to sort the provided objects.

Something simple and new to sort, that also can be sorted in many different ways is dyed pasta. 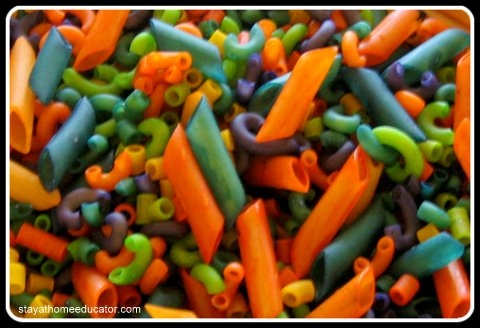 Pictured are several different pasta shapes as well as several different colors of dyed pasta.  When I first showed William this big bowl of pasta he took some time to just play in it and uses his senses to explore.  I have found through both professional and parental teaching experience that when you pop a new bowl of something fun in front of a kiddie, you have to give them time to explore and experiment with it.  So we didn’t just jump into sorting, I let William play with the pasta first. 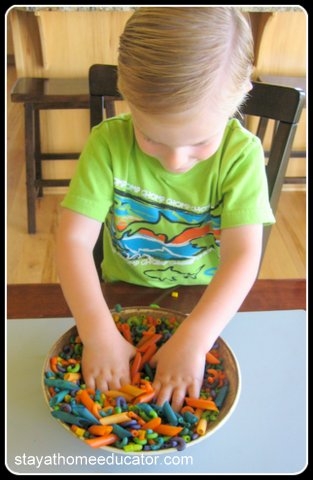 William and I first began by sorting by colors of the same shape.  One attribute at a time.  I asked William to help me find “the long, smooth pastas that look like this,” and I showed him exactly what I was looking for by finding several examples for him to look at. 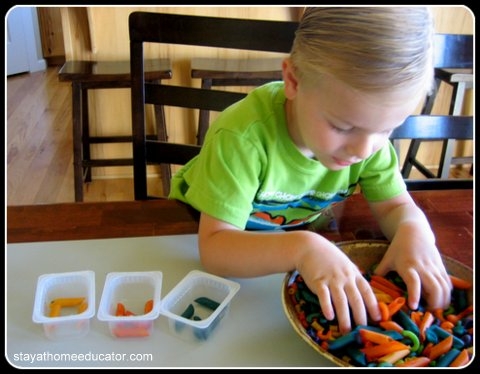 Then, William took off sorting one shape at a time by color.

I then introduced the idea of sorting by color, but using all the pasta shapes.  I pulled out two more containers and began sorting the pasta a such, and within only a few seconds William joined in, “I found one for you, Mama!” and he placed several blue macaroni in the correct container.  At that point I sorted less and less to allow William to do the majority of the sorting. 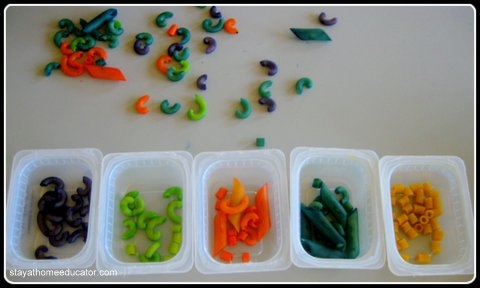 By the time we got to the point in the picture below (after about ten minutes), I could feel that it was time to move on. 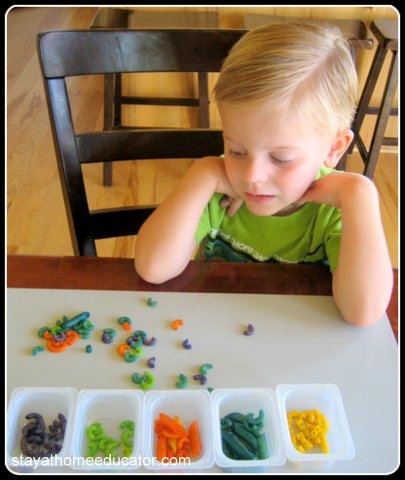 William was getting board with our sort, so I again suggested we try a new way to sort.  “What if we tried putting all the pasta of the same shape together in their own containers?”  I emptied the containers and began sorting the third way. 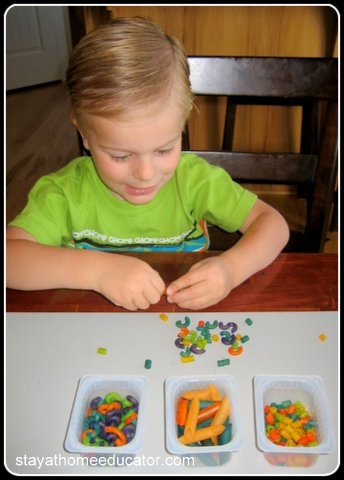 This last one, although sorting by only one attribute, was the most difficult for William because his tendency is to always sort by color, so it was more of a challenge to mentally set aside the color and look only at the shapes to discriminate which container each pasta should go into.

Eventually, William will be at a point where he will not need someone to facilitate and make sorting suggestions.  Soon he will be making his own decisions in sorting and then my job as the facilitator will be to encourage his vocabulary and communication skills as he explains his processing.  William will begin to invent his own classifications and describe his rationale in placement.