Recently William’s language skills have really taken off.  He’ll interrupt a conversation saying, “No, Mom.  Stop talking, please.  I just gotta’ tell Dad something…” and the next thing you know William is jabbering on and on about whatever topic pops into his head, but oftentimes he tries to participate in what his dad and I were discussing by offering his opinions and insights.

However, frequently when I ask William specifics about something, such as which shirt he wants to wear, he responds, “That one,” or “This,” and sometimes something rather unspecific, instead of telling me any details.  So I came up with a game that requires William to use descriptive words.

Describe the Secret Object for Preschoolers

Collect a number of toys and objects familiar to your child. 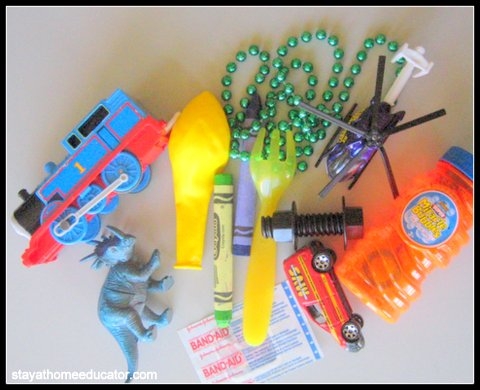 Empty out a diaper wipes box and secretly place one object inside the box.  Then have your child reach into the box and describe the object inside. 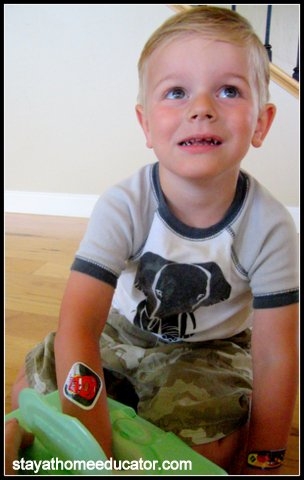 The point of this activity is to help your child develop his vocabulary of descriptive words.  William tends to call everything hard or smooth, so I wanted him to expand by using words like pointy, round, soft, squishy, and so on.

Sometimes, when William appeared to be at a loss for words, I’d ask if I could take a turn so he could hear me describe the object.  I would leave the object in the wipes box, though, so William could take another turn and try again. 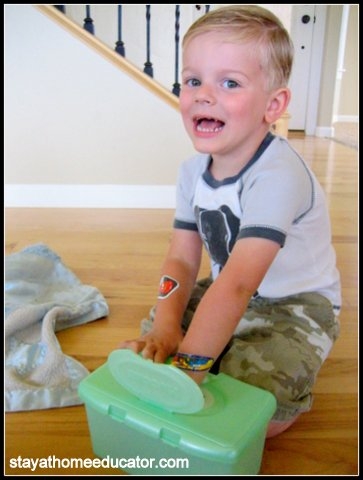 Finally, William would pull the object out of the box, and after his delight in discovering the identity of the object, we again discussed it’s characteristics.  William would handle the object as I pointed out specifics, and then he would try to describe it as well.  It was encouraging to hear William use new words.  At one point William said, “This triceratops has pointy horns,” then he pretended to get pricked by one and yelped, “Ouch!  Those pointy horns poked me!”  I loved hearing that!