My daughter, Corinne (21 months) is constantly asking to color, specifically with purple.  That girl loves all things purple.  For a while, she was asking so frequently that I began leaving the tin of crayons out on the preschool table so she could color at her leisure.  Then, William began to develop more of an interest, with encouragement from his younger sister and began requesting paper so he could trace his hand.  One day I was watching my children and realized they were keeping themselves occupied for lengths of 10 minutes or more.  How wonderful!

And it occurred to me, why not create an at-home preschool writing center for my kids? 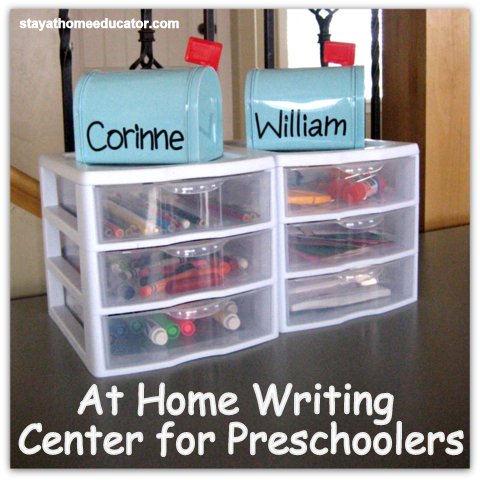 This was very quick and simple to create.  I wanted to include a variety of materials to maintain my children’s’ interests in writing.  I purchased a mailbox for each of them (from Target’s dollar spot) thinking their dad and I could write letters to them, and visa versa.  Two small drawer bins make the perfect containers for most supplies. 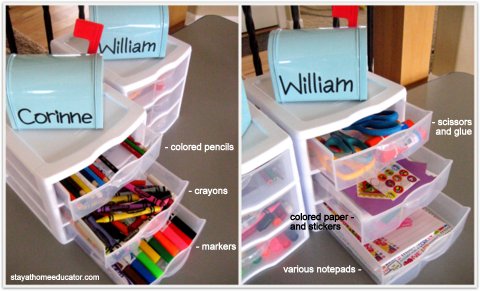 So far I have been very blessed (knock on wood) that neither of my children have ever considered marking on or cutting anything other than paper, and I have not found stickers any place other than paper or T-shirts.  (Although I did have to specify to William that it was not ok to glue paper onto the table). I have one stingy rule that everyone must abide by all the times: clean up after yourself and help others clean up, too.

These supplies are not intended to be portable, although toss it all in a shower caddy and it certainly can be.  I leave all these supplies out on the preschool table so my children can write whenever they choose.  While I did include scissors, glue, stickers, and colored paper in the supplies drawers, this is not intended to replace my craft closet or craft time with the kiddies.  My goal is to include materials that encourage fine motor development.

Sometimes, about every other week, or when the kiddies begin to lose a bit of interest, I rotate or add supplies.  I’ll issue fun holiday-themed scrapbook paper, dot markers, oil pastels, or cutting practice sheets.  I love to include envelopes, which are nothing fancy as they are usually the return envelopes that come with the bills.  Sometimes, for a day, I’ll set out play dough or stamps in addition to what is already there.

I also wanted to include some formal writing practice for William.  So, I laminated some practice sheets and placed them in a green folder for him, along with some coloring pages.  I did the same for Corinne.  (I know.  Writing practice sheets are not an age-appropriate activity for Corinne, but I wanted to avoid potential arguing, so each folder is exactly the same).  Surprisingly, the cheapo markers the kids usually color with do a fine job on the laminated sheets, so I didn’t have to purchase special wet-erase markers. 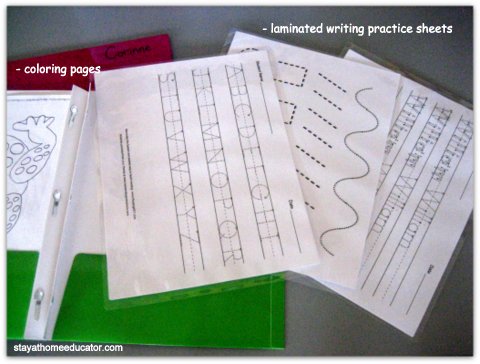 This writing center is mostly self-directedEducator by the children.  In fact, most of the time I sit back and enjoy that my children are entertaining themselves (now for 20 or more minutes)!  Sometimes I will sit down and write with the kids, modeling proper handling of the pencils, or thinking aloud as I write a message.  Included in the notepad drawer is a sticky note pad, a list pad and also a weekly planner.  I’ll use those pads to write down random things, modeling how writing is used for multiple purposes.

Truthfully, I had no idea this would be such a success with my children.  The morning I set it up, William came home from preschool co-op and did nothing but work at the writing center for the remainder of the day.  Seriously.  He went through an entire glue stick in one day!..and I ended up with lots of little notes that say “I love you.”  The next morning, (he wakes much earlier than the rest of the family), my husband and I found him downstairs writing notes to his family and making collages, instead of listening to his read along CDs in his bedroom as we expected him to be.  Corinne is frequently using the supplies as well, making attempts at cutting with the safety scissors or using a whole fist clutch as she attempts to trace her name by scribbling.

I hope you will attempt such a writing center in your home.  Good luck and enjoy!